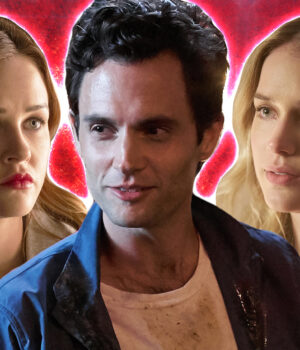 You season 3 is premiering on Netflix this Friday. And our beloved Joe Goldberg is at a crossroads.

He no longer loves Love. Joe may be a witty sociopath, but he does have a line. When he is idealizing you do not break the illusion. Love broke that illusion when she protected Joe. That’s his job! He’s the protector. Now she doesn’t remind him of his mother and he can’t get hard for her anymore.

He got Love pregnant.

And Joe Goldberg has those pesky parental instincts buried inside him that he can’t ignore. His desire to protect children is almost as strong as his obsessions. Almost.

And his desire to protect Ellie may be his downfall…

What Will Happen To Ellie In You Season 3?

After season 2 of You completely disregarded Paco’s existence, it’s hard to predict if Ellie will carry over.

Now, obviously if number 3 were to come true, it would open up an entire new plotline. But one that is also entirely possible.

OK so we know that after Beck was murdered Dr. Nicky was found guilty and went to jail for it.

Then Joe went and published her book, establishing both verbally and through physical action to the police that he had a relationship with her to some level.

The verdict obviously left a lot of questions. With Dr. Nicky truly being innocent, his trial must have seemed at least somewhat questionable to some.

Nothing would alert the NYPD or even and FBI agent who has caught on to Joe more than a quick and unannounced move to Los Angeles.

Just up and leaves his apartment, book store, his favorite glass cage, and he does it right after a murder trial involving an ex-lover in which he was very involved in.

There very well could be an investigation brewing in New York City against Joe Goldberg.

And what if in the middle of that investigation they see an expose published by a girl named Ellie. Investigations in NYC and Ellie’s work could be what brings down Jow Goldberg.

At the end of season two of You, as Joe Goldberg closes the trunk of his car, he says something to himself. He tells himself the Quinn’s buried the case about Forty. And any future investigations. Thus giving him a clean slate. And nothing to worry about.

But Joe is focused on the wrong things.

Forty’s death is irrelevant. There are real murders he committed that were messy. And now he has fled the north east.

Can Joe Goldberg Be A Good Father?

Assuming Joe doesn’t get snagged by the cops or feds, can we expect him to be a good father to Henry in Season 3 of you?

The first trailer released shows a bit of obsessiveness already when he talks about his son. And of course, that;s usually normal, but this is Joe we’re talking about here.

He was holding and cleaning a knife while he named him.

We have seen him go above and beyond for children he hardly knows. It wouldn’t be hard to believe he could do the same if not better with his own kid. Maybe having a child is just the distraction that Joe wants.

When the final trailer for the 3rd season of You was released, it became a little more clear what to expect in terms of plot.

The baby is born.

Joe finds a new woman to be obsessed over. Does Joe-like things (baseball hat, hiding under her bed, etc).

Love knows something is up and knows there is another girl he is obsessed with.

You season 3 airs this Friday on Netflix!