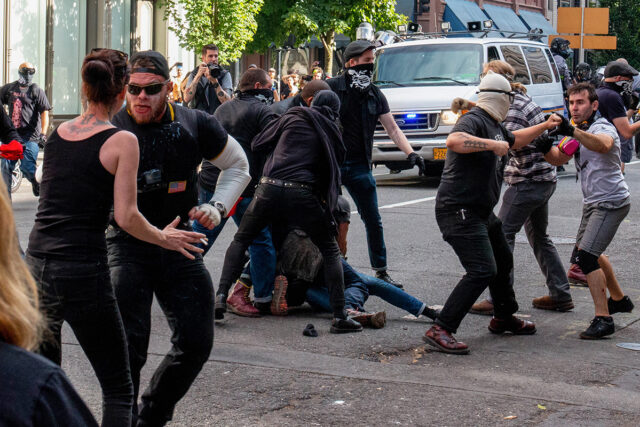 The Proud Boys are not only in Portland. They are international and were established 4 years ago (what a surprise) in 2016. Gavin McInnes is the founder. He used to work for Vice Media. In fact, he was the co-founder of Vice Media. Which is important to note. McInnes has an ability to reach the masses and market a brand.

The name “The Proud Boys” was inspired by the song “Proud Of Your Boy”. Featured in the Disney film Aladdin. Source.

Gavin McInnes was born in England and grew up in Canada. He didn’t make it to the United States until 2001. So it’s strange to think he is the one behind all of this. But regardless, when he started the Proud Boys, these were the qualifications for entry-

So to put it simply The Proud Boys are a far-right, neo-fascist group that regularly engages and encourages political violence. – Source

What Do They Want

In 2018 Gavin McInnes found that the members of his group were being labeled (correctly) as alt-right. McInnes knew his ‘mission’ would be over before it started if that was the general consensus. So he re-branded.

He came out and said The Proud Boys are not an alt-right group. According to McInnes the alt-right focuses on race. While his group focuses on protecting ‘Western Values’. It’s a creative way to dance around the topic, but we all know it means the same thing.

“Defending Western Values” on it’s own sounds like a dangerous concept.

What exactly is being defended? White privilege? Do Western Values mean conservative values? If that were the case then why are only white men able to join? One could only imagine the conversations that take place at their gatherings.

The Proud Boys don’t know what they want. They use vague terms and create reasons to hate people of other races and religion due to their own anger. But their lack of direction and any real value is what makes them extra dangerous.

Cults and hate groups are usually built up of members who are lost or hate themselves.

Gavin McInnes was able to convince thousands and thousands of angry white men that their life sucks because America has “lost it’s way”. (Let’s not forget this guy is from Canada…)

So essentially we have over 30,000 Americans now who are convinced they are jobless/single/depressed/etc because of immigrants.

Here Is Why We Need To Take Them Seriously

Yes, some of their threats towards the city of Portland sound ridiculous. But you have to understand they do have a history.

A concert in Chicago was held in 2017 to protest State Attorney Kim Foxx.

Many members of the Proud Boys were attracted to this event as well as counter protestors. Before long violence broke out. One man took out a 3 inch switch blade and stabbed a protestor in the stomach. He continued attempting to stab other attendees before he was subdued.

“A Humboldt Park man, Thomas Christensen, was found guilty Friday of aggravated battery charges for stabbing a man who confronted him about his purported membership in a white nationalist group outside a concert at Northerly Island in 2017.” – Source

In 2017 and 2018 the Proud Boys had organized multiple ‘protests’ in Portland. However these weren’t really protests. It was more a strategic way to provoke violence and have the chance to “beat up Antifa members”. Clearly the Proud Boys in Portland have become much more dangerous than the rest of the organization.

Proud Boys are not only in Portland.

“The strategy of the far-right Patriot Prayer “flash marchers” Saturday was much like that of their Proud Boy counterparts the night before in New York City: Assemble a ready-to-rumble crew with out-of-town violent extremists, then troll through the urban center in hopes of confronting left-wing protesters, ensuring violence eventually will break out.” – Source

In 2019 in NYC the Proud Boys assaulted an unarmed group of protestors. They took a video showing them beating civilians, some clearly elderly. Only 10 of the members were found and charged.

“The videos that emerged from an Upper East Side event in October showed a disturbing scene: about a dozen men connected to a far-right group called the Proud Boys surrounding and striking a smaller group of protesters, believed to be self-described anti-fascists.

Ten members and associates of the Proud Boys, which the Southern Poverty Law Center has called a “hate group,” were arrested as a result of the altercation.” – Source

In January 2019 The Proud Boys posted a video to their Facebook page threatening the Mayor of Portland. One of many attacks in which the Proud Boys have focused on Portland.

The man in the video was Reggie Axtell. His quotes were violent and graphic. Below is one from the video-

The Portland Threats From The Proud Boys Are No Joke

So knowing what we know about the Proud Boys, especially the ones in Portland, it is safe to say we cannot just assume their threats are empty ones.