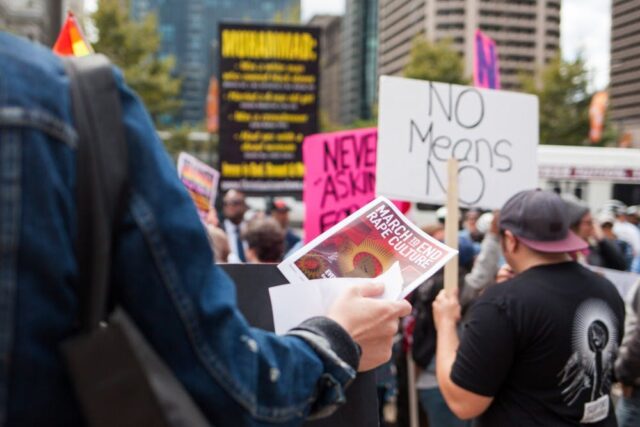 It’s a common thing I’m asked by men, “I want to do something about this, I realize it’s a problem, but I want ideas on how men can help stop rape culture today when I never see it happening?” Or sometimes they ask me “What actions men can take to help spread Feminism” Many of them want to help, we just have to help teach them how. Together, I believe we can eventually solve this epidemic. Together is the key word. There are ways men can help end rape culture.

How can men help stop rape culture? Mostly by being more open with each other about it’s prevalence.

Every now and then we read on the news or social media about rape assault and sexual violence. The spread of rape practices among college men in the US for instance, now makes the act seem a norm. But the fact is, rape or sexual harassment can’t and will never be a norm.

To this end, the society is doing all it can to stop the spread of rape, and it will be nice if men were to champion this course. So, below are five ways you can answer the question of HOW men can help stop rape culture TODAY, as well as teach them actions men can take to help spread feminism.

5. Use your position of authority to effect change

It is no news that men occupy a majority of the positions of authority in the society, but the story is, such areas can serve as a robust platform for the spread of feminism and in helping to put a stop to the spread of rape culture. For example, if the head coach of a college’s soccer team was to develop the habit of always discouraging the members of his team. Telling them to refrain from any kind of sexual harassment by consistently condemning such practices, that could have a substantial positive impact on the young men who are on his soccer team.

Practices such as this are actions men can take to help spread Feminism. Many men are in positions of power without realizing it. Whether it be in their job or their community. Men in position of power respecting the boundaries of other women would be one of the most drastic ways men can help end rape culture.

People take it as a joke. This meme is evidence enough of that. How men can help stop rape culture today? Stop sharing and laughing at disgusting memes like the one above. That’s one of the ways men can help end rape culture.

These days, rapist and sexual harassers do not only commit the crime, but they also have the nerves to brag about it to their friends in the open, and that is how the rape culture is spreading. But as a man, you can disrupt the spread. When next you hear/see someone talking about or sexually harassing any female, man up and speak up. By doing so, you will be helping in putting a stop to the spread as well as teach others the actions men can take to help spread Feminism.

3. Discuss rape culture with other men

When men gather, their conversion often centers around sport, politics, etc. But now and then, you can be the man that alters the tradition. Try to bring up discussion about the spread of rape culture and be critical about it. That’s how men can help stop rape culture. This way, you will be spreading feminism as well as teaching your fellow men that there is nothing good about raping or sexually harassing a woman or girl.

2. Teach your son that NO kind of sexual harassment is justifiable

“Charity they say begins at home.” To sanitize the society of immoralities, we need to start the teachings in our respective homes. As a father, teaching your son/sons that unguarded comments about a female or a person’s body on the street, at the school, etc., is wrong and unacceptable. Teaching these habits at home and from a young age is another one of the ways men can help end rape culture. The earlier they know it is wrong, the better for the society at large.

While it isn’t bad to have a drink or two of alcohol, excessive intake is not encouraged because it can always induce into actions you wouldn’t take under normal conditions. Rape happens to be one of the most common actions or crime men commit while under the influence of alcohol Suffix it to say, therefore, that you will be helping out in the fight against the spread of rape culture if you can refrain from excessive intake of alcohol.

Granted it is a collective effort, but the relentless effort of men can go a long way in helping to stop the spread of rape culture. I hope I’ve shared some practical tips on how men can help stop rape culture TODAY!

Still looking for tips on how men can help stop rape culture? I found this great blog post on Medium!

Or looking for more tips on actions men can take to help spread feminism? Another blog post I found on PsychologyBenefits, both are great!