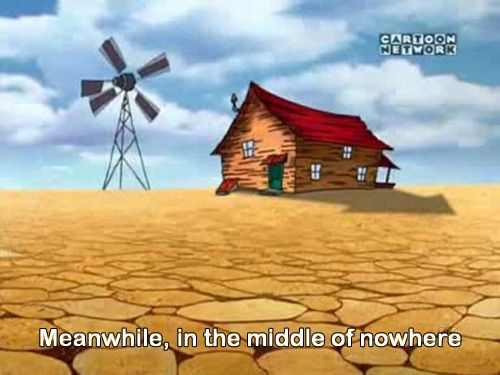 Recent circulating memes/articles have re-sparked an age-old debate for many 90’s kids. We all know the creepy yet charming Cartoon Network hit haunted our dreams. But did we have reason to lose sleep? Was Courage The Cowardly Dog based on a true story? We have used the most popular sources of past research, new developments, and a little bit of original speculation on our part. Well, we finally have gotten to the end of this long investigation. The truth behind the modern-urban legend. This blog post involves a deranged serial killer, the story of the New Mexican SkinWalker, and a town called “Truth or Consequences”. Buckle up for this one.

We’ll start with one of the more universally accepted sources we can find. According to Wikipedia, the creators claim the show’s inspiration was drawn from other contemporary animated works such as the “Ghost In The Shell”. I think I can speak for all when I say…

We’re not buying that.

Now it’s fun to just take “info-memes” like this at face value. However sometimes you do have to dig a little deeper.

While it is hard to work with, it’s our first clue from this vague commentary is going to come from the most specific piece of info provided.

Legend of the New Mexico SkinWalker

According to New Mexico Explorer, the existence of New Mexico Skinwalker is not some sort of myth, they are as real as humans are. In fact, they even described as similar to humans.

As explained by Anthropologist David Zimmerman of the Navajo Nation Historic Preservation Department:

“Like humans, they do kill, and like humans, they have motivations for those acts of aggression. Power and revenge fuel their murderous intent, but such things cannot occupy the brain of a rational creature all the time, and skinwalkers do not make murder part of their daily routine.”

So basically they are not like werewolves or boogieman. Skinwalkers don’t aim to go on killing sprees or torture humans. They are not stories created to entertain/frighten children. Also just to clarify, skinwalkers are an entity that is accepted by doctorate level Anthropologists.

There are still sites and resources on how to behave around a New Mexico skinwalker should you encounter one.

Now maybe these fancy doctorates mean nothing to you. But this part is still weird. New Mexico natives and the Navajo people will all pretend to not believe. They will say they do not know what you are talking about if you bring them up. From children to adults, they have all seen them, yet they are afraid to speak of them. Anthropologist and Sociologist Tony Hillerman spent two decades of his life studying this phenomenon:

“A lot of Navajo’s will tell me emphatically, especially when they don’t know me very well, that they don’t believe in all that stuff. And then when you get to be a friend, they’ll start telling you about the first time they ever saw one.” –Tony Hillerman

Something about the skin walkers eerily similar appearance to the human figure is what truly makes them terrifying.

Ok But Seriously, What Is A Skinwalker?

From what we can gather, a New Mexico skinwalkers are defined as humans that have crossed over to the dark side in a sense. Almost like they “signed with the Devil”. This happens after being mind-controlled by different skin walker. After being sought out by one and converted, the new skinwalkers is given a certain power, whether it be flying or morphing into a wolf, and they change their form. As a new skin walker they roam the landscape in a similar fashion to a human, while also being “different in every sense.” The true meaning of their existence is an absolute mystery.

Skinwalkers take interest in a human before attempting to convert them. It could be an obsession with their strength, or a lust for their beauty, but they will stalk for many months before making any moves.

It is common for stories of New Mexico skinwalker sightings to end up in official police reports :

“Ware said that skinwalker sightings among the Utes are not uncommon. He told us of an encounter with two shapeshifters near the Gorman ranch. The figures he described are so unusual, so far outside our own concept of reality as to be almost comical, like something out of a Saturday morning cartoon. One local who saw them in the road in Fort Duchesne described them as humans with dog heads smoking cigarettes. But Ware was perfectly serious in his description. He certainly did not bare his soul for comic effect and we have no interest in making light of his story. For him, and for many others, skinwalkers are as real as the morning sun or the evening moon.”

At this point everyone must be waiting for this to come back to the original question. Was Courage the Cowardly Dog based on a true story? Yes, but the New Mexico Skin Walker phenomenon is only the tip of the iceberg.

Now on to the real spicy stuff…

First of all, here is the REAL house that Courage The Cowardly Dog was based off:

The house is located in Truth Or Consequences, New Mexico. Yes that is a real town.

And believe it or not? There was a murder and double kidnap in that house many years ago. Check this archived CNN article from 1999.

Nick named the “Toy-Box-Killer” he was sentenced to 224 years in prison for the kidnap, sexual torture, and eventual murder of 3 children. Investigators claim he murdered between 40-60 people. Many of these murders could never be proven.

How is this all connected? The Courage the Cowardly Dog house is in “the middle of nowhere”, David Parker Ray lived about 7 miles north of “Truth or Consequences”, the town where he located and kidnapped all of his victims. Truth or Consequences, NM had a population of about 3,000 in the 90s, making it truly, the middle of nowhere. And, a perfect location for David Parker Ray to find his prey.

Naming the town after it’s true name would have been too obvious by the show creators. Still, the similarities are striking. David Parker Ray was known for traveling down to Truth or Consequence and looking for houses that were isolated and far away from any town. Something that Truth or Consequence had plenty of. After stalking his prey he would use disguises and try to gain the trust of the family inhabiting the secluded home. Once David Parker Ray had identified his targets and learned about them, he had three main strategies

All of these strategies are tactics commonly used by the evil characters in Courage the cowardly dog.

Does a sob story under a fake guise sound familiar?

How about a pretend Hollywood director who claims the house is the perfect set?

The list goes on and on, but we do need to bring this full circle. What does the New Mexico skinwalker have to do with this? And was Courage the Cowardly Dog Based on a true story?

The People of Truth Or Consequence Needed An Answer

David Parker Ray kidnapped and murdered around 60 people in this small, isolated town in New Mexico. Although,it was unlikely there would be any witnesses or thorough investigations due to the towns under-development and almost non-existent police force. The people of Truth Or Consequences needed answers to help them cope. In such a small town, 60 disappearances is essentially an epidemic.

The tactics of David Parker Ray were strangely similar to the Navajo stories of the New Mexico Skinwalker. A human like figure would take interest in a human, stalk them, lure them in with a disguise, and then bring them to the dark side. This theory also explains the reluctance of the locals to speak of the New Mexico Skinwalker. Even if some know the truth, they actually prefer it to the even more twisted reality.

On the top: Artist rendition of New Mexico Skinwalker, created in 1995, remastered in 2007
On the bottom: King Ramses from Courage the Cowardly Dog, 2000

David Parker Ray’s dark side was much more sinister than one could have imagined from Courage the Cowardly Dog. He drove a sex van full of sexual and torturous “toys” to use on his victims. Also the unspeakable tools in his sex dungeons. However, the bad guy in Courage always failed, so maybe where they were going was just as bad. I digress… Was Courage The Cowardly Dog based on a true story?

To Wrap Up: Was Courage The Cowardly Dog Based On A True Story?

Was Courage the Cowardly Dog based on a true story? Most likely it was based on a “fake” story that was circulated in response to a real story.

See you in the comments!

Courage the Cowardly Dog was based on the stories of skinwalkers, the same stories that were exacerbated by the true gruesome acts by serial killer David Parker Ray in the small town of Truth Or Consequences in New Mexico.

Creeped out? Need to cool down? Click here for an article to help you calm down.