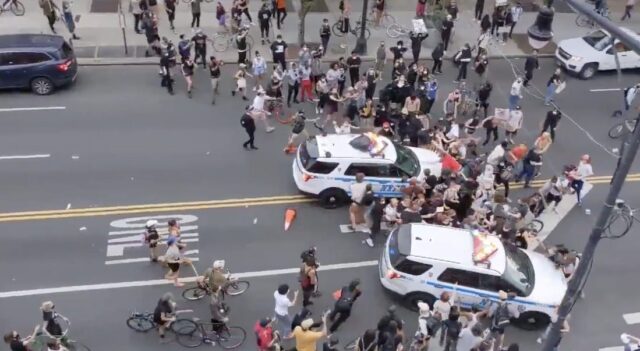 “Footage has emerged of two NYPD officers ram into protesters. Two SUVs ramming into a group of protesters in Brooklyn Saturday during the city’s third night of chaotic demonstrations over the death of George Floyd at the hands of a white Minneapolis cop.

Video shot in Brooklyn showed a stationary police car being swarmed by protesters pushing against a barricade along Flatbush Avenue near St. Marks Avenue in Prospect Heights. At the same time protesters can be seen pelting the vehicle with bottles, traffic cones and even bags of trash.” – Source

And here is a second angle-

That’s when the second NYPD vehicle pulls up, slows down a bit, then clearly accelerates and rams through the crowd dragging protesters with it.

Right when this happens, you can see the first NYPD vehicle follow suit. Press the gas and ram into the barricade and the protesters behind it. Two NYPD officers ram into protesters.

Surprisingly, Mayor de Blasio Is Backing The NYPD On This One

“Look, I’ve seen that video, and I’ve obviously heard about a number of other instances — it’s inappropriate for protestors to surround a police vehicle and threaten police officers. That’s wrong on its face and that hasn’t happened in the history of protest in this city,” de Blasio said. “I’ve been watching protests for decades. People don’t do that. And so it’s clear that a different element has come into play here who are trying to hurt police officers and trying to damage their vehicles, and if a police officer is [in] that situation they have to get out that situation.”

He added that “the video was upsetting, and I wish the officers hadn’t done that. But I also understood that they didn’t start the situation. The situation was started by a group of protestors converging on a police vehicle, attacking that vehicle, it’s unacceptable.

“I’m not going to blame officers who were trying to deal with an absolutely impossible situation. The folks who were converging on that police car did the wrong thing to begin with, and they created an untenable situation. I wish the officers had found a different approach, but let’s begin at the beginning. The protestors in that video did the wrong thing to surround that police car, period.” – CNN

I don’t know about this one de Blasio. I know it’s been a while since you gave the NYPD any slack and you feel like you owe them one, but all of these protesters were unarmed. A vehicle to a pedestrian can be considered a deadly weapon. People were injured and someone being killed was a high possibility. Two NYPD officers ram into protesters, it’s getting serious.

I’m not sure what the right answer is, but it happened, it’s in plain sight in both videos. We will see if de Blasio will change his stance on this one in the coming days once the victims/families are heard from.