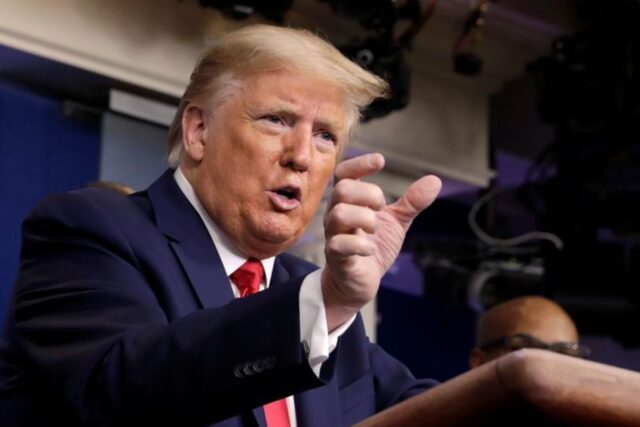 News broke this morning that the 2020 Olympics, set to take place in Tokyo this summer, have been postponed until 2021. This decision of course comes from the increasing concerns over the Coronavirus pandemic.

This afternoon Trump sent out a tweet addressing the decision that was deleted within 5 minutes:

Trump has continued to waver back and forth on the severity of the Coronavirus pandemic. At the beginning of the month he asserted the virus was nothing for Americans to be concerned about. That it was non-lethal, very confined to China, and may slightly impact neighborhoods that are majority Asian-American.

About a week later Trump re-positioned and progressively started to address the situation with a lot more urgency. At first sending out tips for safety as well as Government suggestions to stay indoors and practice “social-distancing”.

Trump’s concern seemed to escalate again when him and his administration demanded that a stimulus package be put together to keep Americans healthy and financially stable as well as boost the economy.

The eventual proposal came in 3 parts. The first proposal was focused on aid and hospital funding, the second was aimed at passing stimulus packages and tax cuts for big corporations, and the third was to provide tax relief for small business as well as direct payments to small businesses and American citizens.

The first two proposals were passed within 72 hours. Unsurprisingly, the Senate is still held up on the third part of the proposal.
There is speculation that this tweet was deleted due to it’s unnecessary charachter shaming of Japanese Prime Minister Shinzo Abe.
Regardless of the reason why it was so swiftly deleted, the tweet supports the currently popular speculation that Trump has been using the Coronavirus to his advantage and adjusting his belief in it’s severity accordingly.
When news of the virus first broke, it was in Trump’s best interest to try and downplay the situation as much as possible. He was aware that a global pandemic would crash the stock market. A stock market that was he had been accredited for bringing to “record highs”.

It soon became obvious that this virus was a concern. He flipped the script and instead said it was an extreme concern and that America needs a stimulus package. He puts together a three part package giving billions to big business including casinos and cruise-lines. The third part promises money directly to Americans so the general population explodes in support for the stimulus bill. The first two pass and as Trump expected, with the bailout money for big business the stock market is already on it’s way back up as of this morning.

Now Trump is once again saying the virus is not a big deal and that the American economy needs to open back up as soon as possible. Many believe he has no intentions of getting the third proposal passed at this point.

He has even gone as far as siding with British Prime Minister Boris Johnson on his proposal of “herd immunity”.

How To Make Your Boyfriend Love You Again