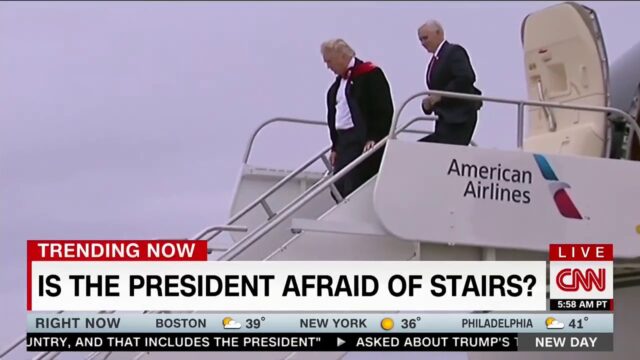 Trump is afraid of stairs it is a well documented topic, it’s fact and despite the ridiculousness of it, this fear is very real.

No one broke it down quite like CNN did. Have to give them the credit for finally putting the pieces together and confirming this bizarre phobia our president has.

When this story first was released CNN caught a lot of heat. As expected. It is not easy to report on harsh truths. But this wasn’t nitpicking, this is the leader of our nation we are talking about. Back then I knew it was a huge red flag. Everyone else seemed to just brush it off, until now.

“Most vessels are a no-go”, explained one correspondent, “we’ve had to have lifts installed on the outside and inside of some of our carriers just for photo ops. Ladders terrify (Trump)”.

One unnamed source from Washington claims booking and traveling is a nightmare. “If there is no elevator in the building, we have to relocate, and sometimes we would be unaware of this until we had arrived.”

Although it is rare, Trump is not alone with this fear.

It is called “Bathmophobia”. Literally dozens are effected each year.

But here is the thing, the reason it all becomes concerning. Most psychologists agree that one who has Bathmophobia into adulthood likely is regressing, or never progressed correctly through childhood. In fact, 80% of Bathmophobia patients are discovered to have more serious underlying mental disorders based around insecurity.

These are not traits you want in a leader. Especially one who prides himself on being “strong”. Yet he needs to hold someones hand to go down a ramp.

Suppose we should have seen this one coming. Look at his strange concern for Obama’s pace down a flight of stairs. Just watching people run down stairs gets Trump all freaked out!

So Trump being afraid of stairs is not only real, but now White House officials are confirming that it is becoming an annoyance. I guess every president has their tick.