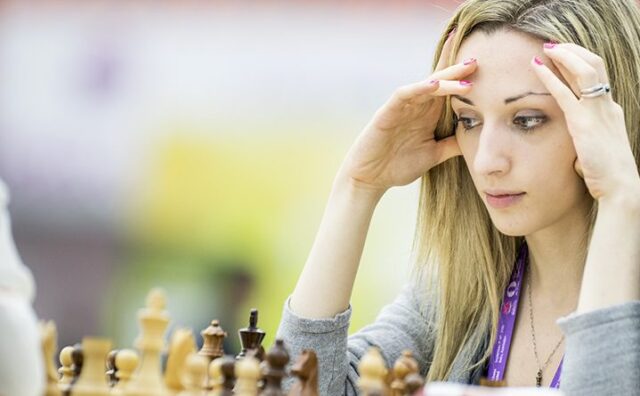 We’re doing something a bit different today on Page 3. Ranking the hottest female chess players across the globe.

You already know we love mixing our column with not only beauty, but respectable talent. Like an Olympic gold medal. Or a modeling career that began with twerking on Vine.

Before you read on, you should know we have an updated version of this list.

For whatever reason, there is no clear answer on what chess is. Ask a room of 30 if chess is a sport, chairs will soon be flying. It’s one of those obscure topics that get certain yester-year jocks triggered as hell. Despite your opinion on chess not deserving the title “Sport”, it is skill based. People are better than others. There is competition. Just like there is competition in this list, without further adieu, here are top five hottest female chess players-

First off, yes, I’m going to ignore that her name is ‘Nazi’. Joking about it would be below me. So obvious, like cheap middle school humor, like laughing at a fart. I don’t go there.

Second, I gotta be honest off the bat. I’m a little biased here. But I think you’ll understand.

Nazi won the 2016 U.S. Womens Chess Championship. She was crowned the best female chess player in the world.

But now get this. The 2017 Womens World Tournament is in Iran this year. Nazi won’t be going, because she refuses to adhere to hijab dress code. And thats not a joke by the way.

“I will not wear a hijab and support women’s oppression. Even if it means missing one of the most important competitions of my career” – Nazi Paikidze (On missing the 2017 Womens World Tournament)

So good for Nazi! Crushing it in chess, looking good doing it, and standing up for her gender like a boss. Have to love it. That’s partly why she gets the number 1 spot. But mostly because she is the hottest chess player.

Still, Nazi Paikidze flipped the bird at a country forcing Sharia law. Wanting her to wear a garb and cover herself. And she’s like nah I’m hot and I want everyone to see it.

It could also be the Israeli Nationality.

But Wait Until We Put Some Glasses On Nazi Paikidze

Are you kidding me!? I did not expect anything close to this. We’re past hottest chess players when it comes to this blondie. Why is no one talking about her?

As I mentioned, finding Nazi Paikidze was a welcomed surprise. Glad the chess league has it’s very own Anna Kournikova.

Yeah forgot to mention, this list is starting with the best. Believe it or not it drops down fast…

Botez looks like the kind of girl you pretend to not know algebra around in hopes that she tosses you a little tutoring sesh.

I’m going to throw a very objective body pic at you here.

Look at the photo above. We can all agree she is at least a 6.7 by all standards.

Is she in the rankings of hottest chess players?

She’s attractive but you feel like she might just barely be in your league. That gets you thinking and before you know it she lands the 2 spot of hottest female chess players.

While Anna here is not exactly my type, she gets huge bonus points for helping push Chess towards the “sport” it could be.

She hasn’t won a major tournament since 2011, but that hasn’t stopped her from leading the fight for respect that her gender faces in this male dominated activity. Check out some examples of her activism-

OK this one is actually kind of hot…uncomfortably..

But for the effort alone… shes on the list of hottest female chess players.

Judit coming in at 4 soley for the reason that she is currently the best female in the world.I imagine that photo is old, you can look up current photos of her if you want. But you probably don’t want to.

On a side note- why is womens and mens chess a different sport? Hey feminists, look into that one for me.

I know Hou you may feel about this kind of girl. But I hear she is very punctual!

Now Hou know who the hottest female chess players are! Need more hot academia? We have just the post for you.