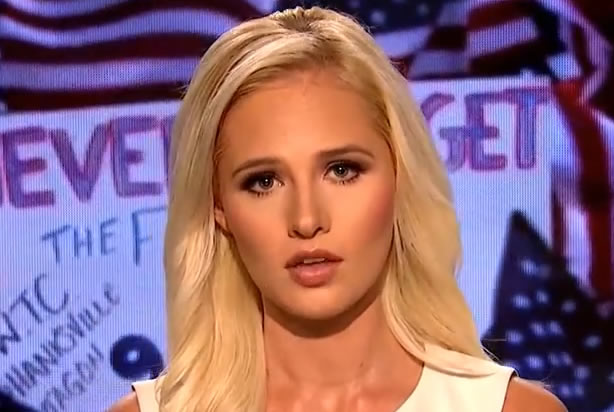 You may know Tomi Lahren as the young, loud, racially insensitive, blonde, new republican firecracker who is so damn hot you never end the video early. Even though you disagree with pretty much everything she says. Or maybe you don’t, everyone’s got their own opinions. Especially opinions on what they look for in sexual partners. So without further adieu, The Tomi Lahren black guys saga continues…

Despite comparing BLM to the KKK, there is a lot of evidence that Tomi Lahren enjoys the company of black guys.

Before we dig into any of this it’s important to point out that while Tomi Lahren comes off as extremely conservative, her tweets from 2013/2014 paint an entirely different picture.

The interview became less confusing when TMZ reported the two were seen later that night hanging out at a bar.

Back in February The Game, an American rapper, made a lot of derogatory accusations about Tomi Lahren and the UNLV basketball team. These comments came after Tomi Lahren’s comments on 21 Savage being detained by ICE.

Nikki Minaj has even come to Twitter to question why Tomi Lahren is so “obsessed” with black culture.

The game went on to attack her physical appearance in college.

Back in 2017 Tomi Lahren tweeted out a picture of her with a black man at some fancy looking event. She captioned the photo “love of my life”.

Of course it didn’t take long for twitter to jump to conclusions that the two were dating.

Tomi Lahren was supposed to be on the Breakfast Club with Charlamagne Tha God.

After TMZ released a video of the two getting a little “too comfortable with eachother” in the streets of NYC. Included in the video is the two exiting a hotel looking particularly giddy.

Producers at the Breakfast Club shut it down out of fear he would be too agreeable with her.

In the video you can see the two do come to an agreement that Black P***** Matter.

“In the most remarkable Daily Show interview of Trevor Noah’s run, Lahren sat across from the host to disparage the Black Lives Matter movement as “rioting and looting and burning” and spout fabricated statistics about police violence — articulations that Noah only lightly, gracefully challenged. Lahren told Noah — and, more importantly, his audience — that “a black man is 18.5 times more likely to shoot a police officer than a police officer is to shoot a black man.” – Source

For many Daily Show fans this interview was incredibly confusing. Trevor Noah has done hundreds of monologues defending protestors and discussing the importance of BLM.

Then with the poster girl of anti-BLM right in from of him, he played nice. He let her get away with fake stats. And overall let her control the conversation of a topic that most believed he felt extremely passionate about.

“TMZ caught Noah and Lahren grabbing drinks together in New York after taping the show.” – Source

There has been a lot of evidence piling up recently that Tomi Lahren may have a little Jungle Fever. I imagine it’s a common sexual fantasy among people with her kind of background and upbringing. The taboo of it, the thought of how upset Pa would be if he knew you were getting railed by ‘one of them negros’!

From her video rants we can see that she is conservative, but from her tweets from college it looks like when it came to parties and sex she was anything but.

So how serious can we take her conservative values? Not that there is anything wrong with it. Like Meek would say, we ain’t judgin her, she’s ain’t on trial!

In fact, it makes me like her a little bit. Shows a little humanity in a strange way.

But back to the Tomi Lahren black guys thing…

This video was captured in Times Square BEFORE the two even held their interview. In front of the camera, Tomi and Charlamagne both agree in and support the movement “Black Penis Matters”. For some of her grassroot supporters, this is a shocking statement to hear from Tomi.

Before long Tomi is appearing in Charlamagne’s Instagram posts.

Interestingly enough, that picture was posted on Instagram December 2nd, 2016. On December 2nd, 2016, she also admitted to Trevor Noah in an interview that she has slept with at least one black guy. Considering her self-reported political views, for Tomi Lahren black guys are an unexpected choice. But nonetheless it seems to be confirmed!

Before long, Trevor and Charlamagne are buddy-buddy with the hot little far-right political pundit. Even defending her in their own circles!

Does Tomi Lahren Really Have A Thing For Black Guys?

So maybe she was doing this just to have some allies in the black leftist area?

But now this has gone to the next level. Twitter and the rest of the internet are CONVINCED that Tomi Lahren is currently dating black guys.

Whether they got it on or not is a totally different story, but the fact remains she is a babe and could get pretty much any dude she wanted. Proof: