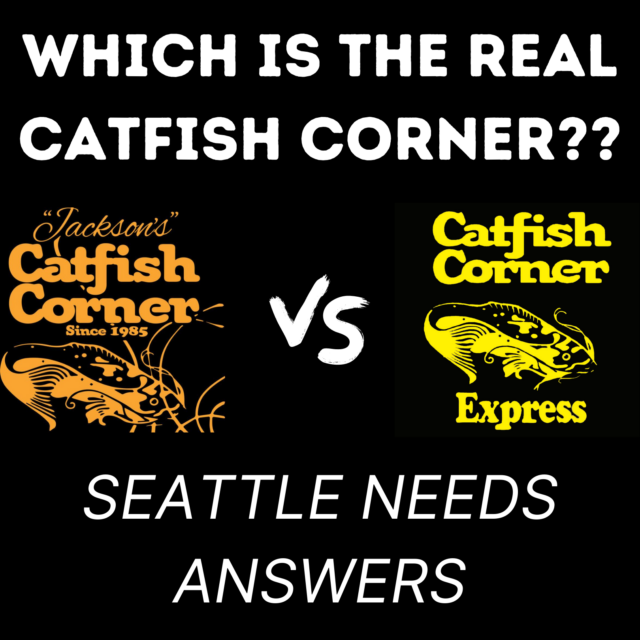 I have been out of Seattle for almost a year now. But I have heard whispers of a feud in the restaurant world. And the subject of debate? None other than our beloved Catfish Corner. Apparently now there is two. And all of Seattle is confused as to which is the real Catfish Corner. I’m setting out to do just that.

After landing in Seatac at about 3PM Seattle time I was close to Catfish Corner Express so I figured I would go there first.

Off the bat I knew I would be a little biased here. When I left the Seattle area this was the original Catfish Corner location.

But I did not expect this kind of welcoming.

The store was fairly crowded, a lot of activity in the parking lot. All good energy.

Inside I was greeted loudly by a man who asked what I needed and was ready to explain anything on the menu for me. I of course knew exactly what I was getting.

Food came out fast. Like FAST. I mean under 3 minutes.

It was absolutely incredible. The fried catfish was just as amazing as I remembered. The tartar sauce, corn bread, hush puppies, all of it just as great as it always was. (Seriously, they have the best hush puppies in Seattle).

They also had a bunch of new stuff too like the lobster mac and cheese and calamari. I couldn’t resist trying those two. Both were incredible.

Burgers were on the menu too but that will have to wait until next time.

OK so if I had to guess which is the “real” Catfish Corner. It’s definitely not Jackson’s.

First of all, the logo is different. Second, the comfortable welcoming feeling that you get at Catfish Corner will NOT be found here.

Walking in felt like going into a Chipotle, it was almost factory looking. There was no one in the store when I arrived but immediately it felt like everyone was trying to ignore me.

It felt oddly unwelcoming and to be honest the whole restaurant gave me a weird feeling.

If it wasn’t for this blog post I wanted to write I probably would have left. I walked up to the counter where I was rudely asked “what I want”. I got catfish and was unapologetically told they were out of corn bread, hush puppies, and tartar sauce. They were really pushing prawns on me (which I don’t like) but they wouldn’t stop insisting so I got an order of those too.

Out of nowhere a guy comes from the back and starts shouting and everyone individually by name. But then one of the employees shouted back about not getting paid yet. It was awkward. But unfortunately the employee being yelled at was my cashier. So I was forced to wait this screaming match out.

Eventually (who I now assumed was the manager) told the employee to take care of me, to that the employee quit. This was quite the experience for me let me tell you.

The manager then came over and apologized and took my credit card finally.

I was very weirded out by the whole experience and the atmosphere of the restaurant. My dry fish was OK. It was a little moist on one end. With tartar sauce could have been a 7/10 but without it was probably a 5/10.

I ate about half of it and jetted out of there.

I do not recommend Jackson’s Catfish Corner if you are in Seattle.

The Real Catfish Corner Of Seattle?

Catfish Corner Express in Skyway is the winner.

I’m pretty sure this must be the one with the original owners. Either way it’s the one that still has the comforting feel I remembered and the food is way better. (To be fair Jackson’s was out of everything so maybe not a fair test?)

One Person Killed, 11 Wounded in a Minneapolis Shooting, Police Say