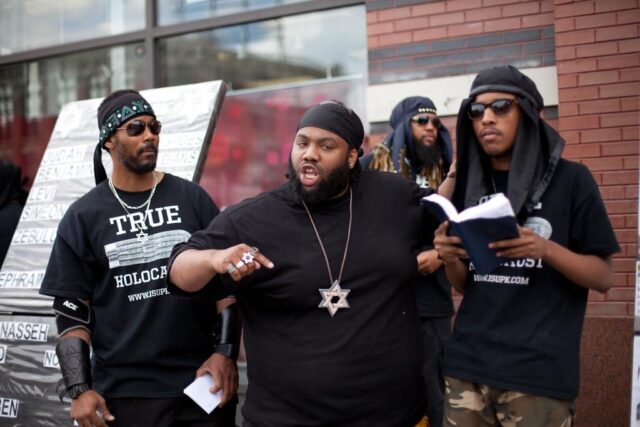 Tensions between the black and Jewish community may be higher than ever before.

Recent posts and statements from prominent members of the black community have been circulating a theory that blacks are the true Hebrews. That the Jewish people essentially “stole their spot” so to speak, and have tricked the rest of the world into believing it. These initial statements have spiraled into a deep tension. Tapping into and revealing a divisive belief that has quietly been held for some time now among certain communities.

The well-known athlete posted a picture to his Instagram story highlighting sections of a book he was reading. Although many sources have deemed the quote false, the sentiment DeSean felt towards the Jewish community was clear. The accuracy of the quote is irrelevant to the bigger picture.

After facing criticism online he told his followers he has no hatred in his heart towards anyone. He then proceeded to double down and focus on a specific highlighted section.

The quote below that was highlighted by DeSean displays a common form of antisemitism. The belief that the Jewish community is working towards world domination. Those who believe in this Zionist idea will point to credit cards, and their influence in banks and media as evidence of this.

Jewish people are used to hearing this version of antisemitism. But the next point is a new one. At least to me it is. The theory that black people are the true Hebrews. And they are God’s chosen people, a spot that was stolen from them by the Jewish people.

I’m honestly not sure if that claim can technically be labeled “antisemetic”. Since he is implying that he would be one of the “true Hebrews”. Regardless, “Blacks are the real Jews” is DEFINITELY the hottest take most of us have heard all summer. So unsurprisingly the internet searches on Black Hebrews were going through the roof.

DeSean Jackson eventually made a public apology. Allegedly due to a plea from his organization to apologize for PR reasons.

This however was not enough for many members of the Jewish Community. Many of which were surprised to see no action by the NFL. There was also no athletes or coaches in the league voicing disapproval for DeSean’s actions. (This however could have been largely due to a lack of interest in the topic, rather than hate. In the the entire history of the NFL there have only been a total of 64 Jewish players).

The silence among the league and country was concerning to many members of the Jewish community. Especially when others starting chiming in on Twitter and Instagram supporting DeSean’s claims.

Suddenly there was a strange, surreal moment. Where it seemed the black community and white supremacists were in a sort of agreement. Members of both sides were armed with alleged articles and research. A claim that most had deemed absurd, was now revealing itself to be a belief held by many. Hidden for a while.

Soon Jewish people were posting back in retaliation to the claims. Words like Zionist, antisemitism, all those great buzz words started getting thrown around. And the battle had begun.

It is known that there Black and Jewish tensions have been on and off for a while now. But with social media in play, this will be different.

In an attempt to defuse, Nick Cannon tried to apologize to the Jewish Community. He was then met with backlash from both sides.

I hurt an entire community and it pained me to my core, I thought it couldn’t get any worse. Then I watched my own community turn on me and call me a sell-out for apologizing. Goodnight. Enjoy Earth???

Now he looks suicidal almost in that tweet…Side note someone please check on him. I think most can agree Nick Cannon is most likely a well intentioned person who accidentally got in over his head. And maybe didn’t understand just how tense things were between blacks and Jews.

A member of the Oshry family took to Instagram in defense of the Jewish community. She posted a slide show that was re-shared by thousands of Jewish and non-Jewish people.

Here are some select images from the slide show:

Now while I do see the point trying to be made here, that top circle has always been there. And members of the Jewish community have openly said they want Islamic people dead. Including the Oshry sisters own mother.

Many people argued that “Mainstream Antisemitism” is non-existent. Pointing to the large majority of Jewish people in media and Hollywood to back that view up. One user explained that Nick Cannon being fired was case and point of this.

As for the far-right and far-left, well, everyone is a little scared of them. But I do understand that it is scary now to see all four fronts coming at your identity so aggressively.

Again the numbers on this slide aren’t *inaccurate*, but to many online who are believers of Farrakhan and this movement found this to be a moot point.

Mostly because many of these public figures named are signed to studios or work with an agency that would never support any type of antisemitism. Some referred to these charts as “cherry picked”.

And here is the last slide and point I am going to bring up. This pie chart highlights the percentage of religion based hate crimes.

(Why she felt the need to also mention that anti-Islamic hate crimes occur less I do not know. Kind of goes against her whole original point which was “You can be an activist for everyone at the same time”.)

Unsurprisingly, the black community did not want to hear about experience Jewish people have in the field of “hate crimes”. A term that has almost become synonymous with the black community due to the high levels of police brutality that occurred through American history towards them.

This of course lead to further tensions. Black people calling Jews privileged would be one of the nicer tweets you would see.

Also, if we are going to break down hate crimes by religion, (and you are not going to include blacks who were Catholic/Christian) then I think most would have guessed it’s probably around a 50/50 split between Islam and Judaism.

But the Oshry sisters made sure we all knew that anti-Islamic hate crimes only occur 14.5% of the time. And this obsession with dividing up religion and who has it worse brings me to my final point.

Not about Jewish safety. I care about everyone’s safety. But I really don’t care about your religious beliefs. I respect your right to practice them, but as an American I am allowed to say I believe all religion is silly. All religious people have to respect that as well.

Seriously, can we stop arguing about who is the chosen one and what happens after we die? And instead maybe focus on this life?