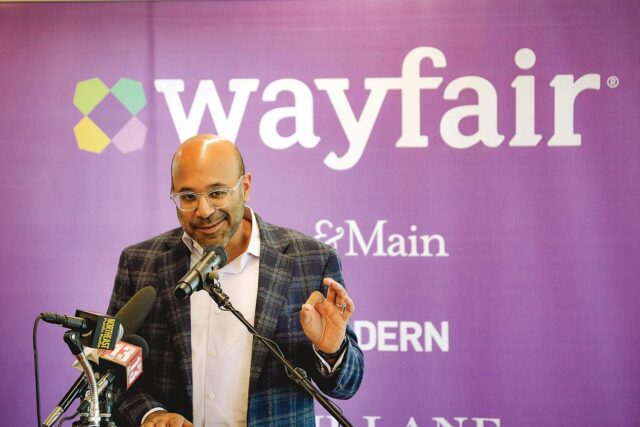 Creator of Today’s Five joined podcast “The Rabbit Hole” this week to defend the claims in this article, as well as demand answers from mainstream media outlets who are protecting Wayfair and the CEO.

What If The Wayfair CEO Actually Doesn’t Know Anything?

So let’s give Niraj Shah the benefit of the doubt. Even for one second.

We know that Wayfair is an online eCommerce platform. It operates similarly to sites such as Overstock, QVC, and Amazon. They allow third party sales to occur on their site. Once you make a seller account with them, you can upload products to your own account and sell them through Wayfair.

So let’s say Wayfair was being used as an online catalog for child trafficking. In theory it is possible that the CEO of Wayfair and the higher ups had no idea that this kind of activity was taking place on their site.

However Wayfair still owns the platform. It is their responsibility to put an end to this even if there is a one in a million chance that it is true. Everyone is aware that human trafficking is a rampant problem. Everyone also knows we have no idea how it’s all happening. Yet when we find a possible lead everyone is so quick to call it completely bogus? Even when the Wayfair CEO steps down? If that is going to be the mentality every time an accusation about human trafficking is made then we will never put an end to it.

If Niraj Shah actually cared about saving human lives, he would realize this might be an actual thing. Instead, before the CEO of Wayfair steps down he will try to save stock value.

Why has Niraj Shah not given an explanation for the missing girls names? Or the missing items on the front-end of the site?

It’s because he is either in on it or does not know. If he does not know, then denying the accusations right now is simply evil. If you have lost control of your platform shut down the site and invite the FBI to do an investigation. Right now it looks like Wayfair is hiding something. If the Wayfair CEO steps down, then we know they are.

Then he needs to admit that. And stop saving face. Every minute he tries to save face over this are minutes we could be saving children.

While on the topic of taking human trafficking accusations seriously…

Shame On You Snopes

Snopes.com used to be one of my favorite debunking sites. In over 10 years I had never seen them get a story wrong. They wait months saying “undecided” before they put a “false” or “true” tag on a rumor sometimes. However with this one, they were ready to close the case before the CEO even gave an explanation.

Here is the statement from Wayfair CEO that was apparently enough for Snopes to call this “False” within 3 hours.

“There is, of course, no truth to these claims. The products in question are industrial grade cabinets that are accurately priced. Recognizing that the photos and descriptions provided by the supplier did not adequately explain the high price point, we have temporarily removed the products from site to rename them” – Snopes

Are you kidding me? First of all the cabinets were NOT accurately priced, that has already been proven. Second, the cabinet pricing was only the tip of the iceberg. And it is the only thing the CEO of Wayfair addressed.

Breakdown Of Everything Snopes Missed

“We reached out to Wayfair for more information about the expensive pillows and shower curtains, but have yet to receive a response.” – Snopes

Seriously Snopes? You don’t think that is weird? That they won’t even talk about the other products? Why won’t you even mention the baby books that were 11k-15k?

“We reached out to Yandex for more information about the “src usa” search term, and will update this article accordingly.” – Snopes

Again, waiting on more information. Don’t say it is false yet then!

“The claim that Wayfair is trafficking children is based almost entirely on one person’s confusion over an expensive cabinet. This conspiracy theory, like so many conspiracy theories, started with a wild and unfounded assumption that would be sickening if it were actually true. As of this writing, absolutely no credible evidence has been offered to back up this accusation.” – Snopes

This is the kicker. How dumb do you think your readers are, Snopes? “Based almost entirely on one person’s confusion over an expensive cabinet”. Did you not look into the conspiracy at all? Or are you just trying to downplay it? If the Wayfair CEO steps down will you look back into this?

Or the fact that they were dealing directly with detention centers! Extremely disappointed in Snopes. And have lost all respect for them as the Wayfair CEO steps down and they continue to call this false with little to no research.

Snopes did not even address the children’s names. They ignored the fact that the same SKUs were duplicated at varying prices with no descriptions or MSRP matching the manufacturers data. Snopes did not mention the fact that these cabinets could only be found on the back-end by searching through Google. These items could not be found on the front-end of their site. Check this video to see.

Instead, Snopes would rather just tell the masses that they aren’t smart enough to understand expensive cabinets.

“No credible evidence has been offered to back up this accusation”. Oh so now you operate like Courts System? Innocent until proven guilty without a doubt? Why do you even have the “Undecided” option then? Such a joke…