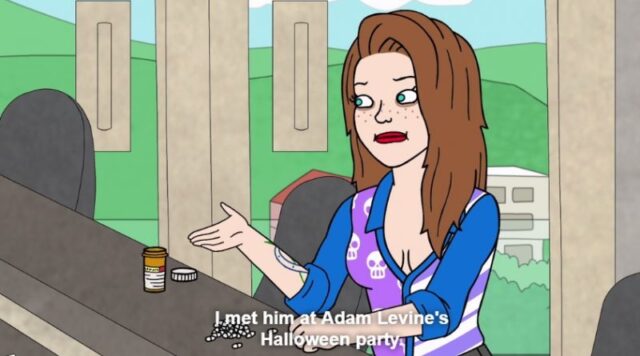 It Really Was Too Much, Man…

I wrote this piece in an attempt to fill the hole left in my heart from the loss of Sarah Lynn after this weekend. Very easy binge watch. (Even if I’ll never understand why)

I may be slightly behind. Been catching up on ‘Rick and Morty’, but this sentiment needed to be expressed. The life of Sarah Lynn deserves more than a few Reddit posts. And this is my part in doing so.

Sarah Lynn may not have been widely loved, but I want to take a moment to break down Sarah Lynn as a character. To look into the parts of her inevitable train wreck. The parts that were revealed to the audience. While I look forward to pandering to those in agreement (the ones who agree that the character of Sarah Lynn deserves to recognized). But as any writer, I hope to open minds. Show fans a different angle. One that reveals that the predictable saga of Sarah Lynn told a much larger story.

Episode starts with a flashback to the set of ‘Horsin’ Around’, a boom in the shot calls for a quick break in shooting.

Right before cutting to the jazzy intro, BoJack gives Sarah a horrifying (Maybe he was trying to help?) speech as she sits under the table. Since this is the FIRST scene we get of Sarah Lynn, I believe it’s worth breaking down-

This is all the introduction we get before seeing the Sarah Lynn we know and love.

Next thing we know she’s on BoJack’s doorstep. The finished product of child-star abuse that we all expected. Washed up, promiscuous, and addicted to everything. Fans and critics alike quickly wrote her off as a two-dimensional character. In a sense they were right. It is true that through the series she would not experience much growth as a character, but there was something about her that made her deeper. It felt almost as if she was aware of her linear ride. Making her possibly the deepest two-dimensional character ever envisioned. And she embraced it. And it was awesome…

Right off the bat Sarah Lynn was a total nut-job. Stabbing herself in the mall over Andrew Garfield. Crushing up pills that the doctor from “Adam Levine’s Halloween party” gave her. And then comically shoving her face into it like Scarface.

She was absolutely crazy! …… so naturally I immediately connected with this character. Like on a spiritual level.

Luckily(?), BoJack gave her exactly what she needed(?). A strong, responsible adult to tell her ‘YES’ to anything she wanted!

The episode continues with Sarah Lynn using BoJack’s house as a 24-hour party, allowing us our first real look into Sarah Lynn’s persona. She’s like the honey badger! I watched and laughed the whole way…

We all know the story. BoJack was receptive to the parasitic relationship and allowed it to continue…Until Sarah Lynn pawned off the award BoJack had gifted her.

NOT ONE OF HIS PHYSICAL PIECES OF VALIDATION!!

So, they yelled. Which lead to sex.

When it was all said and done, roles had changed a little. Now BoJack was not only being an enabler, but he was also arguably taking advantage of a young girl who clearly saw him as a father figure. Don’t forget how old BoJack is compared to her…

SURPRISINGLY, BoJack does the rational thing. He tells her he will cut her off, figuring that with tough love she would have no choice but to turn to rehab. A common and usually successful tactic in treating addicts. But Sarah Lynn is not your usual addict. And her explanation of this begins to unravel the tragedy that is Sarah Lynn.

Basically – She doesn’t need him! Unlike a heroin addict who lives with his mom, this is just a stop for her. Without missing a beat she casually reminds BoJack that she is still a celebrity and wonders aloud which of the BILLION people she should call who would let her party at their house.

Seriously, it’s like a billion. There are people way less famous than her that can do exactly that!

And she knows she shouldn’t do it but…as Sarah so eloquently puts it- “I can, so I will.”

Through all her absurdity Sarah Lynn maintains a strange notion of intelligence. This trait of hers is illustrated not only in her sense of awareness, but also her extensive vocab and her consistent wittiness. And while I don’t really want to delve into it here, there has been a lot of discussion of her ‘dreams of being an architect’, some even maintain she had a degree of skill in the field.

It is made apparent that Sarah is smart enough to know she is headed down a terrible path, but she truly does not care. Almost as if she feels it is destiny beyond her control. Even as Sarah Lynn puts her gruesome fate into words. Predicting that she will die tragically young, proclaiming that it is too late for her, there is still a slight undertone of sarcasm/tounge-in-cheek, but she is being serious. She knows what is coming. Her coping mechanism is to tell the truth about herself, which at first glance is so dark that it can come off as dead pan humor. Especially when immediately after she erupts back into her obnoxious and careless self. Exiting the house in true Sarah Lynn fashion.

If a two-dimensional character displays awareness of their static nature, do they gain depth? I believe so. And I believe Sarah Lynn is a perfect example of this.

So BoJack has a deadline for his book. He has about 3 days. While procrastinating he goes from vice to vice, coffee, cigarettes, tequilla, trying to figure out what he needed to focus.

Now, I went to college in America. So when this scene began it reminded me of one thing. The real vice he was in need of for a late night project. And I was really hoping it would head that direction…

Now, at the time I was unsure if Sarah Lynn would be a recurring character. I made an audible “YYAASSS” when I saw her back on BoJacks couch. Especially with all the drugs! I knew we were in for a good one.

Weird doctor saying their for college kids so when they come to “their term papers have written themselves.” A hyperbole for sure. But at the same time, it is a caricature of a real group in our society. This helps paint the picture Sarah Lynn was apart of. An illustration of an addicts ability to reason with themselves. They will trust a ‘doctor’ in a lab coat, even though they know its just a coat. Before he leaves he lays out complex instructions, relayed so quickly they can’t possibly be understood. He then pops some of the drugs for himself before going to “perform child heart surgery”.

Like I mentioned, for someone that went to college and used stimulants in the past to ‘help study’, this episode struck many chords. First funny, then dark. But always scarily accurate.

Once we hit BoJack’s trip there isn’t much more of Sarah Lynn in the episode. But leading up to it she was her hysterical self and my love for her as a character was solidified.

Sarah Lynn was my spirit animal…RIP

I was excited for Sarah Lynn and hoped to see more of her once season 2 came along. Unfortunately, she only appeared in one episode. Episode 3 – “Still Broken”.

So Sarah shows up and she’s obnoxious from the get go. Sporting a trashy but sexy outfit and possibly on drugs. Needless to say, I’m pumped for this episode.

Early on Sarah Lynn has me cracking up during the entire exchange with her TV ‘family’. Instantly reminding me why I was awaiting her characters return.

Sarah Lynn: “This sucks, you guys suck. I don’t even know why I came to this party.”

As fun as this episode was, an observant viewer can identify some chilling hints of Sarah Lynn’s past. The obvious one being her mention of her mother’s boyfriend.

Child Hollywood actress and her mother’s boyfriend is a ‘photographer’? One would call it a trope if it wasn’t a reality.

And then she licked the bear fur, able to identify it as bear fur because her “stepdad was a bear”.. Like, wait. She associated it.. From licking.. But.. Wow… That’s too much man.

The episode is titled “Still Broken“.

Episode 8- We learn that Sarah Lynn has been sober for almost 9 months. BUT she did it so the drugs would have a stronger effect after a tolerance break.

Episode 11- Just when her 9 months is up, BoJack happens to be looking for a bender buddy. He calls Sarah.

This was Sarah Lynn’s final episode. But at least we can say, as always, she put on a good show.

Sarah Lynn was the one to FINALLY talk about the fact that Diane is literally Daria.

On a bender fueled by various drugs, Sarah Lynn and BoJack travel the country via blackout. The two find themselves in a grungy hotel room. The bender could have lasted weeks. Sarah Lynn turns on the TV and by chance, they are just about to announce her as a winner at the Oscars.

She jumps up and down, proclaiming she had forgotten she was even nominated.

Then a bear comes up to the stage to accept the award for Sarah, who (obviously) is not at the show. After all the evidence I’m hard-pressed to believe anything other than that bear is Sarah’s childhood abuser. And there he was, accepting the biggest award of Sarah’s life. Acting as her closest relative.

Soon after, Sarah would pass away in the planetarium. Death from overdose. This happened way quicker than I expected.

A lot can be speculated on her death. Did BoJack’s selfishness kill her? His inability to be alone and ability to drag her back into her own hole?

The fact that the heroin was branded ‘BoJack’? Or, the idea that BoJack himself can be likened to the drug heroin?

All things I do not wish to get into… Atleast not right now. That was never the purpose of this article. When remembering Sarah Lynn, please also remember the good times.