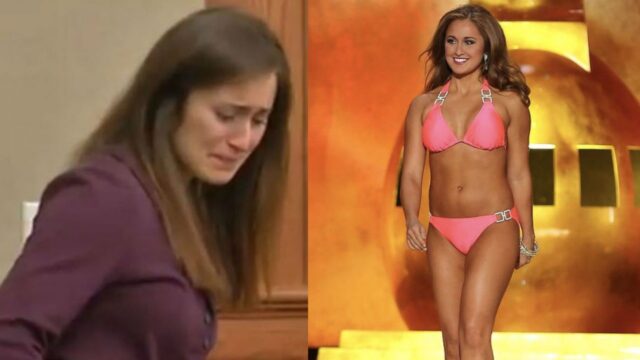 Ramsey Bearse, a former beauty queen (Miss Kentucky to be exact) was sentenced to jail time for having sexual interactions with a 15 year old student of hers.

“Ramsey Bearse has been sentenced to two years in prison for exchanging sexual photos with a teenage student while she was teaching at a West Virginia school. She is set to report to Lakin Correctional Center and Jail by 10 a.m. on Monday, July 20.”

“She was named Miss Kentucky in 2014, and impressed the judges by playing bluegrass music on her fiddle, which she started playing at 15 years old.” – Source

After Ramsey Bearse was done with her pageant career. She went into teaching.

She ended up being a science teacher at Andrew Jackson Middle School in West Virginia.

“This major scandal started in December 2018, when Bearse was arrested for allegedly sending topless photos to a former teenage student from August to October 2018 on Snapchat. The male student’s parent discovered them on his phone, which were saved on the phone’s camera roll.”

“The former beauty queen claimed at the time that she meant to send the photo to her husband, but accidentally sent it to the student. She added that he continued to ask for photos, and Bearse did so because she was “afraid to not appease him.” – Source

You have to love that defense. She kept sending pics of the nip because she was afraid of not “appeasing” a 15 year old? Interesting.

Luckily she did go into further detail as to why she felt so obligated to continue to send nudes to a 15 year old.

Of course, there were plenty of rumors that the two did more than send messages. Multiple student reports indicate oral sex from Bearse was an almost every morning occurrence.

“Bearse said it all started innocently as she kept in touch on Snapchat with her former students, asking them how school was going and if they enjoyed their summer.

The former teacher said the young man she ended up sending the photos to “asked a lot of questions and I crossed the line and shared too much information of what I was going through at the time.”

“Basically, that my husband was working all the time and was too distracted and overwhelmed with work to pay attention to me. In addition, since I moved to West Virginia, I felt like I was completely alone. None of my family lives here, and I didn’t have any friends,” she said.

Bearse said she accidentally sent the young man a risqué photo that was meant for her husband. She said the young man’s name was listed next to her husband’s name on her phone.

“From there, he (the young man) asked me for more, and I panicked. I was afraid to not appease him, and when he asked for more, I sent him more photos of me,” Bearse said. – Source

If you’re going to pull that card and say you cheated because your husband is distant, at least choose an adult. Leave your husband with SOME sort of man card left. Instead of having to live with the fact that some 15 year old pre-pubescent stole his wife.

“It pains me to say it, but I’m having a hard time believing Ramsey’s story that she was only on Snap with her former students to keep up to speed on their academic careers and whatnot. Or how that first bewb picture she sent was an accident, meant for her workaholic husband. Just a slip of the thumb. And after that she was compelled to keep those nip shots coming. I mean, it’s a hell of a coincidence that the first one went to her former student and not say, her sister or whomever. And a little too convenient.” – Source

Spicy Confessions: “Groped On The Subway… And Liked It”