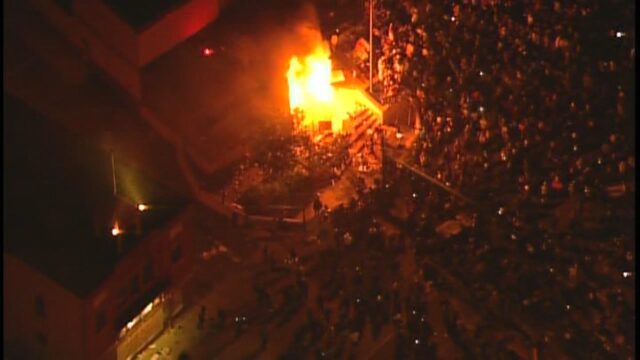 “MINNEAPOLIS (WCCO) — Minneapolis is in the midst of a third night of unrest in the aftermath of George Floyd’s death, with protesters reportedly taking over the police department’s 3rd Precinct building late Thursday night.

Reports of the break-in came in at about 10 p.m., with helicopter footage also appearing to show a fire raging in the precinct’s parking lot.” – CBS Minnesota

*Update – 12:53 AM ET – Trump tweets out a response to the situation. As expected, using the term thug and threatening to shoot citizens is unlikely to deescalate the situation

….These THUGS are dishonoring the memory of George Floyd, and I won’t let that happen. Just spoke to Governor Tim Walz and told him that the Military is with him all the way. Any difficulty and we will assume control but, when the looting starts, the shooting starts. Thank you!

*Update – 1:43 AM ET – Protesters have now burned down a Walmart, multiple police stations are burning, so far 5 precincts have been abandoned

BREAKING NEWS: Massive fire at a Walmart in #Minneapolis amid riots. Multiple police stations are burning as 5 precincts have been abandoned.#minneapolisriots #GeorgeFloyd #MinneapolisRiot pic.twitter.com/JNfVl9bwyC

*Update – 1:43 AM ET – Protesters continue to hold control over 3rd precinct, they are now shooting fireworks over the burning building.

Fireworks are set off over the 3rd precinct in Minneapolis as protesters celebrate burning the building down in memory of George Floyd. #Minneapolisprotests #BlackLivesMater pic.twitter.com/nzarVh5em9

You can see looters got into Burlington at Northtown Mall. No looters around, police guarding entrances pic.twitter.com/fupNlNXJ53

What started out as a peaceful protest around 11am this morning to bring awareness to the death of George Floyd turned to absolute chaotic violence by 8pm.

Around noon store owners started to close down and board up their shops. Target, Haskell’s Wine and Spirits, and JB Hudson Jewelers were reportedly the first to start this trend. As other shops noticed these actions, they began to wonder if they were under-reacting to the current situation. Before long a large majority of shops in downtown Minneapolis had closed for the day and boarded up their windows and entrances.

Jack Farrell, the CEO of Haskell’s made a statement after being identified as the first store to board up.

“We respect the protest, but if our store location gets looted or damaged, we are not sure if we’d be able to recover — especially in light of the current revenue loss due to the COVID-19 pandemic.” – Source

It seems like a reasonable enough decision to make. The protest was peaceful when they boarded up, but most protests do start peaceful before they head south. You would imagine that a lot of store owners in Baltimore during their riots had taken a similar precaution.

At 4pm small explosions were heard. Protestors were setting off fireworks low to the ground, aiming them at local businesses and homes.

Things are escalating in downtown Minneapolis. MPD in riot gear and using tear gas. Some protestors shooting off fireworks extremely close to the ground.#GeorgeFloyd #WCCO pic.twitter.com/NxJhxElqAl

Once the fireworks started going of the Minneapolis Police Department took action, dawning riot gear and deploying tear gas into the crowds and marching forward with riot shields.

Before long fireworks were being directly shot at the police officers who eventually retreated but still attempted to consolidate the rioting area.

By sunset Molotov cocktails were being thrown at buildings and stores. Protesting turned to looting as rioters began breaking into any windows that were not secured, and setting fire to certain establishments that looters were unable to break into. Many advocates of the BLM movement explain this change in behavior was due to the lack of respect being shown to them by local store owners.

Once gun shots were heard the Minneapolis Police Department admitted that control of the city had been completely lost.

By 7pm there were over 30 reports of cars being flipped over and set on fire, by 9pm there were over 100 calls to the MPD about home invasions, arson, and stores being looted by large groups at gunpoint. – Source

In the Target parking lot next to the 3rd precinct. People throwing glass bottles, one guy even jumping up and down on the hood pic.twitter.com/3H5F60jwIY

“Protests outside of Minneapolis Police 3rd Precinct building Wednesday night turned into a fiery, deadly riot, with dozens of businesses along East Lake Street looted. At least 15 fires were intentionally set in the areas, including at an AutoZone store, a Wendy’s restaurant and an affordable housing complex that was under construction. All three completely burned down.” – Source

Through this all the MPD is in a shootout with the rioters. They are firing guns at each other, and rioters are throwing whatever weapons they have available and continuing to start as many fires as they can in the vicinity.

As of now, 12am ET, the riot is only getting worse. the Minneapolis Police 3rd Precinct building, as well as many other buildings around it, are still burning and the shootout is only escalating.

Firefighters are having trouble putting out the fire due to all the violence surrounding them.

“KSTP Reporter Beth McDonough was near the scene and reports that firefighters were asking police for protection so they could battle the flames.” – KTSP

Things are out of control right now in Minneapolis. Just like in Baltimore, the police have retreated. The city is now left to rioters.

Despite all the violence, County Attorney Mike Freeman refuses to give in to the rioters.

““We’re going to investigate [Floyd’s death] as expeditiously, as thoroughly and completely as justice demands,” Freeman said. “Sometimes, that takes a little time and we ask people to be patient. We have to do this right.” – Source

Click here for KSTP’s live feed of the ongoing riot.