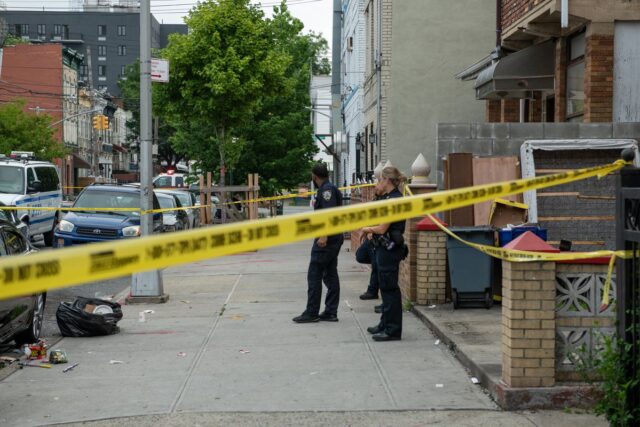 NYC is seeing some of it’s most violent days in over 20 years. From extensive gun violence to rouge arson, NYPD has completely lost control of Brooklyn and parts of Manhattan.

Gun violence has now taken the forefront however.

The shootings — including a 21-year-old man left fighting for his life after being shot in the head while sitting in a car in Sheepshead Bay early Sunday — were more in one day than the whole of the same week last year, sources said.

They capped 43 shootings so far this week — more than triple last year’s tally of 13 for the same period, sources said.” – Source

After last week, NYC is on track to break into the top 10 most deadly cities or for the first time since 1990. A list that both Chicago and Detroit have been able to stay off of for over a decade now.

“It has been nearly a quarter century since New York City experienced as much gun violence in the month of June as it has seen this year.

Mayor de Blasio is going to go with the half-measure approach. AKA do nothing. It’s frustrating when your city is burning down and the Mayor refuses to start any sort of hard stance. Last week he declared he would continue to send more officers into the street, but also that he is working on overhauling the NYPD.

Just a quick message to de Blasio – you can’t keep sending in officers who don’t feel like you will have their back.

There are obvious reasons why shootings are up in NYC. Part of it is NYPD officers are scared. Not scared of the criminals and shootings, they are scared of you de Blasio and the Jury they may have to face if they even pull out their taser or put their knee on a looters back.

There has been an over correction de Blasio. As the mayor you need to ignore the media and look at NYC. Racial injustice isn’t the issue right now if it is gang related and mugging related. If you think this is about protesting you are out of your mind. This is a city taking advantage of a police force that you have neutered. Innocent people are dying.

Take back control of your city. Then you can discuss police reform if it is needed. But how could you even keep defunding/reform in your mind while NYC murders start to pass Detroit? Get it together de Blasio. This is your last term anyway you won the last election by 10% in a city that doesn’t vote. The city hates you. The least you can do is actually put your foot down and make actual steps to stop this nonsense.

New Jersey Man Arrested After Attempting To Rob A Local Store By Coughing On...