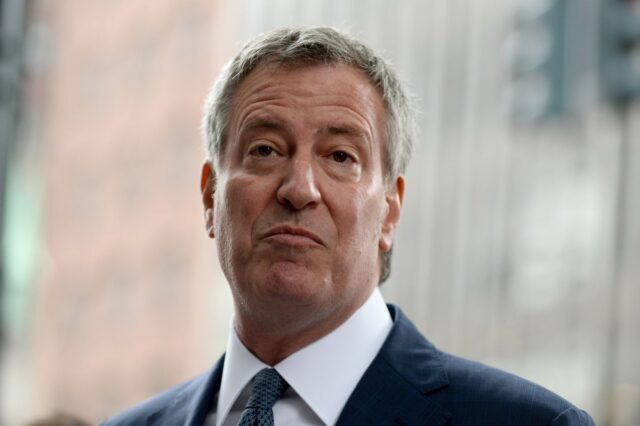 The soft-spoken wishy-washy mayor of New York City that no one even remembers electing really showed his true colors yesterday during his press conference yesterday. Never in my life have I seen a politician, let alone the mayor of NYC, avoid taking a position as adamantly as he did. What is important to you mayor de Blasio? Because aside from trying to appease everyone to secure reelection I really can’t name one position or stance you are passionate about. Mayor de Blasio has no spine or stances and New Yorker’s need to realize that. Because things are getting bad.

Like this quote from 2001, clearly he was just falling on identity politics. All he does is shout that he’s a liberal and pretend to be all about civil rights, until the NYPD gets mad at him then he’s a moderate conservative for a few weeks.

And that’s not from lack of research, it’s from this man constantly playing both sides of the coin. Working so carefully to not step on anyone or any groups toes. The mayor of NYC needs to be decisive. Are you enacting a stay at home order or do you respect the protests and think they are more important? That was the ONLY question NYC wanted to hear from you. Instead we got to hear this babble of nonsense.

“The fact is there’s very few people out protesting at this point,” de Blasio told reporters around midnight. “The NYPD has been addressing the situation. There’s over eight million people in the city and the people out right now number in the hundreds, and they’re being dealt with by the NYPD.” – CNN

Very few people?? You go on air to talk to us and you just deny that it is happening?

The damn Mayor is high as a fucking kite and literally didn’t even address the fact that union square is pretty much on fire right now.

First of all, yes he did look high. But it was past his bedtime so we can let that slide. But what do you mean very few people? Are you in the Hampton’s or something right now? Union Square was actually on fire.

And let’s not forget we are also supposedly mid-pandemic. Because Cuomo sure hasn’t. He reminds us every morning how it’s going to kill us all. And mayor de Blasio was agreeing with him all the time. But now his main voter base is protesting so making sure they get treated fairly is more important that talking about the Molotov cocktails that were thrown into police cars.

The Mayor de Blasio no spine went on to say – “

‘He said that many of those demonstrators are “not from communities of color” and have a “warped ideology” that leads them to “harming working people who are police officers.”

He did not specify how he knew protesters came from out of town, but said his administration would provide details as police processed arrests.

“People who represent the communities of our city and the residents of our city are not joining negative and violent protests,” he said. “You can see it with your own eyes.”’ – Politico

So not only does he not have proof that the violent protesters are from out of town, there is no way to know that and to make a blanket statement like that is so clearly wrong it’s just stupid. You’re telling me not a SINGLE violent protestor was from their respective neighborhood? How could you possibly know that?

But more importantly, why does it matter! Who cares if they are from out of town. Union Square is LITERALLY on fire. If you are going to go live and waste our time listening to you at least give some kind of safety advice or something relevant. Don’t just go up and lie, he said there were no reports of broken windows while the NYPD already had reported over 200 of them.

THEN mayor de Blasio goes on to demand swift punishment for every officer that touched a protestor, but completely ignored the police van (that could have been holding up to 10 people) that was blown up with Molotov cocktails.

NYPD and their supporters were not happy with de Blasio’s apparent level of priorities.

If Mayor DeBlasio wants a light touch then let him stand in front and take the first brick to the face. Or perhaps he can sit in a police vehicle and catch the Malatov Cocktail that’s thrown into it. Here’s the light touch, DeBlasio brain! https://t.co/Dqqm3PgSrV

So now, mayor de Blasio no spine is back, he gets scared and does another 180.

“Mayor Bill de Blasio, who swept into office on a promise of reining in aggressive, race-based policing, defended the NYPD Saturday night amid continuing violence during protests across New York City.

At the same time, the mayor condemned demonstrators whom he said came to the city from out of town just to incite violence against police officers.” – Politico

This man needs to step up and be someone. Whether we like those views or not, he needs to start having some. Because this back and forth everyone is right everyone is wrong strategy is getting NYC nowhere. Take a stand de Blasio, in either direction, pro-police or pro-reform, or even double down on the pandemic and order a strict stay at home. But get this madness taken care of. Get your city under control.