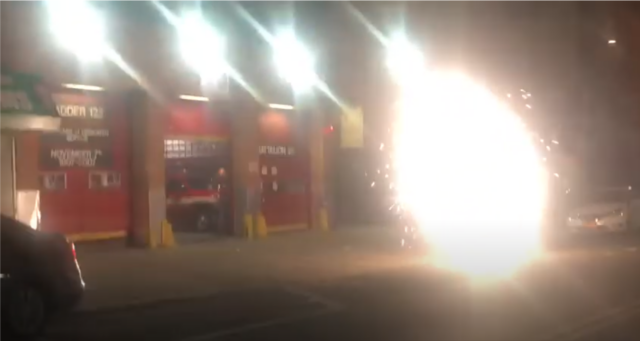 The plot has thickened. The NYC fireworks mystery has taken a left turn. One of the popular conspiracies already was that this was an NYPD protest. Which would explain the extremely low response rate to firework calls. Despite how aggressive they are getting.

But now we have this video.

Here you have more from what's going on in NYC the past weeks, here you have FDNY, yes that's city workers, doing fireworks in middle of the night.#Brooklynfireworks
pic.twitter.com/hGfUqbKQIK

“In a Brooklyn neighborhood overrun with nightly illegal fireworks, one resident found out that some of the amateur pyrotechnic aficionados are none other than local FDNY firefighters.

The 33-year-old Crown Heights resident said he and his wife were passing by Ladder 123 on St. John’s Place near Schenectady Avenue at about 11:30 p.m. Tuesday when he saw a group of firefighters ignite what appears to be a fountain firework display.

“As public servants, I feel like they should know better than to light fireworks at 11:30 at night. It’s completely brazen wantonness,” the man said.

“It’s like they didn’t understand why what they were doing is so absurd. It’s late at night, there are kids. You have to be responsible and set an example,” he added.” – NY Post

I think everyone can agree that a member of the FDNY knows better than to shoot off fireworks at 11:30 at night. Right outside the station. During a time when firework complaints have spiked by 4000%.

And I don’t think the member of the FDNY came over because he didn’t understand. Although I’m sure that’s the image he wanted to give off at the time. But watch the video. They light it, turn, see the car and hide behind the wall. They know they shouldn’t be doing it.

1. The fireworks actually are a secret NYPD protest strategy. This would explain the low response rate to firework calls. AND officers not arresting firework smugglers. Or questioning them. So maybe, FDNY is doing fireworks as well in support.

2. The fireworks are a city wide protest for all emergency personnel.

3. (And most likely) The fireworks have become a symbol of anarchy. And anyone who is unhappy right now, even if it is for different reasons, is shooting off fireworks to try and express that.

A Few More Possible Theories On The NYC Fireworks Mystery

I still think it’s the anarchy symbol. But I’m just a blogger.

But I can still tell this is more serious than the NYPD is acting like it is. It looks like Baghdad in Brooklyn-

How Does The NYPD Plan On Getting To The Bottom Of The NYC Fireworks Mystery?

“On Monday, fed-up residents honked car horns outside Gracie Mansion in an effort to push Mayor Bill de Blasio to take action. The next morning, he announced that a fireworks task force would be created to disrupt the use and supply of illegal fireworks.

The task force will include 10 police officers, 12 fire marshals and 20 investigators from the city sheriff’s office. Sting operations, he said, will “go and get these illegal fireworks at the base.”

Which then lead to Twitter getting mad. As they always find a way to.

the people: defund the police
de blasio: did you say make cops find out where the fireworks are coming from?
the people: no we said —
de blasio: sorry, can't hear you over all these fireworks https://t.co/LZ9qybqh2P

Ok to be fair, the NYPD does NOT have the greatest rep when it comes to undercover sting operations…

Which brings me to my final and greatest theory-

Why Are Fireworks Going Off? Why Does The NYPD And DeBlasio Seem To Not Care?

2. Trouble makers cause trouble as expected.

3. Calls come in, NYPD says they are busy and will get to it.

4. Just when it gets to the breaking point, NYC will “solve” the NYC Fireworks Mystery (aka stop selling fireworks to kids).

5. The fireworks stop, everyone agrees they need the NYPD again, and tensions settle.