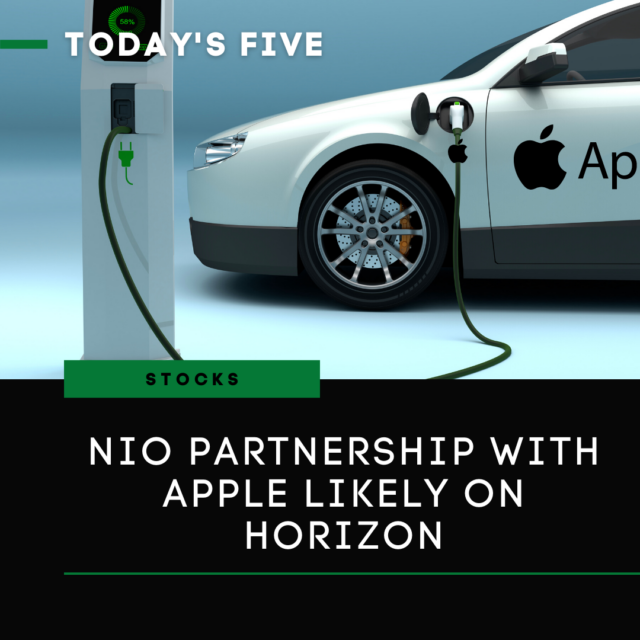 Expect NIO stock to explode in the coming weeks with these talks of a Nio partnership with Apple, hopefully you got in under $19 when I told you!

Talks are re-emerging in regards to a Nio partnership with Apple.

Initial Discussions Between Nio Partnership With Apple In 2020

We have known for a while that Apple has been interested in getting more involved in the EV market. The obvious obstacle here, they make phones, not cars.

So what’s the obvious move? Find an EV car manufacturer and slap your logo on it.

What’s even more obvious? To do it in China, where the rest of your manufacturing is happening.

““We believe based on our investor conversations over the last few days that many on the Street would rather see Apple partner on the EV path, than start building its own vehicles or factories given the margin and financial model implications down the road, coupled with the strategic product risk around such a gargantuan endeavor,” Ives said.

The chances of strategic partnerships with the likes of Tesla, Volkswagen or other auto manufacturers in China such as Nio and Xpeng are more than 70%” – Source

The Hiring Of Kevin Lynch

“Apple in August 2018 re-hired Doug Field, who spent five years working at Tesla where he oversaw production of the Model 3.

Field served as Apple’s VP of Mac Hardware Engineering until he left Apple for Tesla in 2013. Field left the Apple Car team in September 2021 and was replaced by Kevin Lynch.”

Apple already tried to do this with Tesla. Clearly it didn’t work.

Now why would Apple replace a Tesla EV engineer with an ex-executive from Adobe?

Kevin Lynch has spent the last decade integrating Adobe with every facet of Chinese technology. He not only knows the language and culture, but he has connections and trust.

It is true that Nio is going to begin manufacturing phones. Don’t let the Bears trick you. This does not make them rivals. In fact it’s the opposite.

Customers want a phone that connects better to Nio’s vehicles, Li said. He indicated that a Nio phone wouldn’t be about making money or competing directly with traditional phone makers, but providing something that’s a functional extension of the car.” – Source

Li literally said this venture is NOT an attempt to rival top phone manufacturers.

He later had a quote used out of context to imply that he was.

But Nio beginning R&D for phones inside of their cars, that gives more weight to the Nio partnership with Apple than anything else.

When Can We Expect A Nio Partnership With Apple To Be Announced?

Inside sources say the actual announcement may not actually be until January.

But you will see more obvious clues being dropped, expect NIO stock to hit $30 by August.

This is purposeful, and according to NIO’s CEO, it has no intentions of slowing down its expansion to become a household brand.

In fact, the company plans to use its experience in technology to create an even larger and more holistic experience for its customers that may soon include mobile phones that pair with NIO EVs – sort of a reverse strategy to the approach Apple is currently taking.” – Source

Reverse strategy? Or strategically covering all bases? A Nio partnership with Apple HAS to be coming.