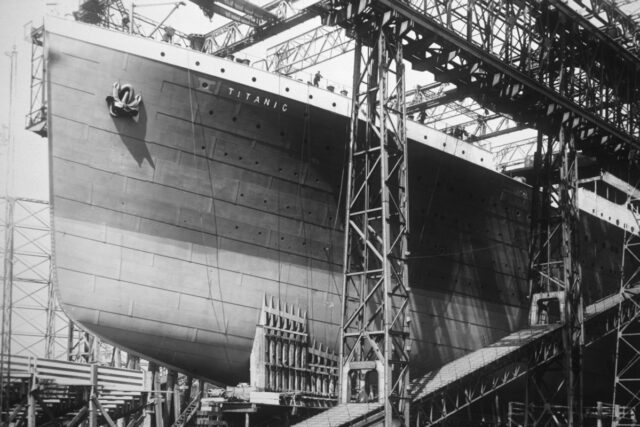 It is the only conspiracy theory that is equally obscure as it is credible. The greed, the insurance fraud, the photographic evidence, it’s all there. And now we now for sure that James Cameron wasn’t the first one to make a boat load of money off the Titanic sinking.

Buckle up for this one.

A Tale Of Two Ships

White Star Line owned two ships. One was The Olympic. The other was the Titanic. The Olympic was put into service in June of 1911. A few months later she collided with another ship and was badly damaged.

This accident was a financial nightmare for White Star Line. They were found to be responsible for the incident and had to pay for both ships as well as all legal fees.

At the time, White Star Line was building another ship. The Titanic. So these guys were already deep in the red trying to get these ships out and finally see a return on their investments.

Repair of the Olympic took almost 2 months. To cut costs many parts intended for the Titanic were instead used to repair the Olympic.

After a second accident for the clearly cursed Olympic, further parts were taken from the Titanic to keep the Olympic afloat. But at this point the Olympic had become nothing more than a money pit for White Star Line. A ship that was just built wrong. And no matter what, it was going to keep having issues. And it was going to continue costing them money.

Completion Of The Titanic

The Titanic was finally set to leave on her maiden voyage on April 10, 1912. Slightly delayed due to the need for new parts after being partially stripped to repair the Olympic.

Across the Atlantic, going towards New York, the Titanic hit an iceberg and sank about 2 hours later.

Overnight the Titanic went from the famous “un-sinkable luxury cruise line” to a name that only reminds people of an American tragedy that killed over 1,500 passengers.

After the tragedy of the Titanic the Olympic went on to sail the seas for another 24-years. Serving in World War 1 where the ship was even referred to as “Old Reliable”. It seemed nothing could make the Olympic sink. Which was odd considering it was notorious for being quite the opposite of “reliable” in the very early 1900s.

Eventually ownership changed and the ship at some point was dismantled and sold for scrap.

*Below is a video simulation of how the “Titanic” sank, if you are interested.

But What If It Wasn’t The Titanic That Sank?

What if it was actually the Olympic that sank? Could it have been a scheme to get rid of a ship that was costing money to maintain and allow White Star Line to cash in on the ship’s million-pound insurance policy?

This is where the root of the Titanic conspiracy theory is found.

What if at some point after the completion of the Titanic, they made a quick switch?

The new “Titanic” was actually the Olympic. And the “Olympic” was the brand new, un-sinkable Titanic.

The insurance payout from the accident was enough to save White Star Line and keep them alive.

It may also be worth noting that White Star Line increased their insurance policy on the Titanic 5 DAYS before it’s maiden voyage.

So White Star Line kills two birds (and 1,500 people) with one stone. They get a huge payout for a piece of junk they knew was going to sink (The Olympic). Then they get to double dip and use that same un-sinkable ship for voyages and pretend it was still The Olympic the whole time.

Many believers in the Titanic conspiracy theorize that famous American banker J.P. Morgan was in on the plot.

Images have emerged that seem to suggest the Titanic conspiracy theory may have some weight behind it.

Above is an image of the Olympic sitting in a drydock. This image is the closest one we have to actual footage/prints of the Olympic. Which is unsurprising.

Notice the highest row of portholes on the white railing. If you look closely and count them, you can see how they are laid out. The last 5 portholes have two close together, one set apart, and too more after that close together again.

Below is an image of the Titanic under construction:

Now count the top-most portholes on the railing of the Titanic.

You can see the last 5 portholes are evenly spaced apart. Unlike the Olympic.

And now here is a photo of the “Titanic” before embarking on it’s maiden voyage.

Now finally, here is an image of the “Olympic” docked in New York after the “Titanic” had sunk.

There would be absolutely no reason for workers to replace the portholes (or the distance between them) in between construction and these voyages.

The only explanation is that this final photo of the “Olympic” in New York, was/is actually a photograph of the Titanic.

The Truth Behind The Titanic Conspiracy Theory

Evidence that is available definitely points to a strong motive and a strong possibility that White Star Line did pull a switcheroo.

However with the safe assumption that all people who were possibly involved are dead now, it’s unlikely first hand questioning would do any good.

Not to mention the ship is at the bottom of the Atlantic ocean. And has been for over 100 years now.

So the timeline of checking for physical evidence is certainly running out, if it hasn’t already.

And one wouldn’t expect the U.S. government to be eager to sponsor an expedition to prove that one of the biggest tragedies in American history was actually insurance fraud partly at the hands of J.P. Morgan.

What are your thoughts? Let us know in the comments!