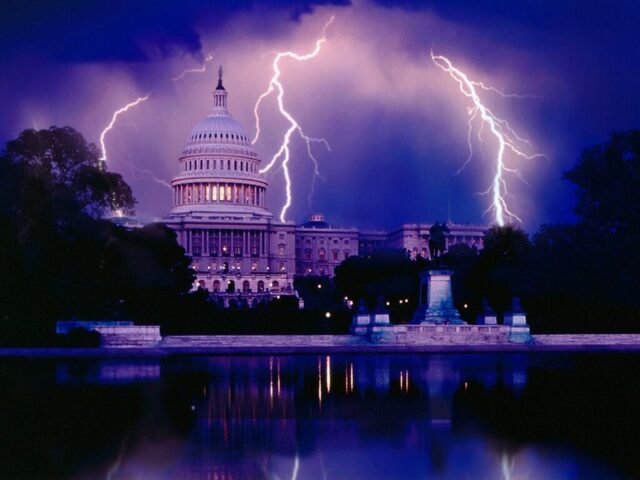 Early Friday morning two members of the National Guard were struck by lightning. The two were deployed to monitor and keep the peace during the DC protests. I’m not a very religious man, but if there was ever a time God was saying “get it together down there”, I think this might be it.

The members were near Lafayette Square when lightning hit the area near them and they were injured by the strike, NBC News reported.

They were rushed to an area hospital with serious injures, but expected to survive, according to the report. – Source

Many people did warn that bringing in the National Guard would be dangerous for everyone involved. But I don’t think anyone had something like this in mind.

“Two people thought to be National Guard members deployed during protests in Washington, D.C. were hospitalized after lightning struck the area of their post not far from the White House early Friday, a fire official said.

The strike and possible injuries were reported shortly after midnight inside a perimeter anchored by Lafayette Square, the site of George Floyd demonstrations this week, according to Vito Maggiolo, spokesman for the district’s fire and emergency medical services department.

The two were hospitalized in non-life-threatening condition, he said.” – NBC

So very much a freak accident. A lightning striking a human let alone to National Guard members patrolling a protest, well, lets just say it is very low odds. Luckily it appears both of these National Guard members, despite being struck by lightning, are both in non-life-threatening condition and are expected to make a full recovery.