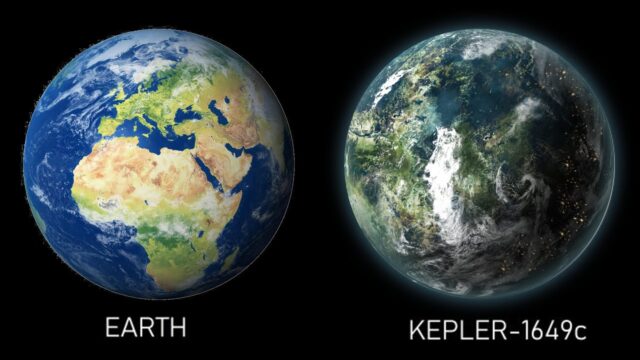 If the recent team-up with Space-X for a launch wasn’t enough, NASA is now announcing that they have discovered a new planet. According to a team of scientist using data from NASA’s Kepler space telescope, the scientist has found an Earth sized exoplanet (a planet that orbits a star outside the solar system) orbiting in its star’s habitable zone.

A habitable zone is the area around a rocky planet that can support liquid water. So we may have a future planet to live on if things on Earth go wrong like coronavirus, mass protest, evolving climate change, and sightings of UFOs.

Scientist discovered the planet when looking through old observations from Kepler, which the agency retired in 2018. The name of the planet is named after the telescope, Kepler-1649c. While It was misidentified at first, researchers reviewing Kepler’s data found that the newly discovered planet had the identity of being called a planet.

Kepler-1649c is only 1.06 times larger than Earth. It also receives 75% of starlight from its host star, which is more than what Earth receives from the Sun. That means that the exoplanet’s temperature may be similar to Earth’s.

But unlike Earth, Kepler-1649c orbits a red dwarf. Though none have been observed in this system, this type of star is known for stellar flare ups that may make a planets environment challenging for potential life.

But there is still much that is unknown about the new planet. Kepler-1649c’s atmosphere can play a big role in the planet’s temperature. We wouldn’t want to live on a brand-new planet where the temperature is way below freezing.

There Is Some Skepticism

According to calculations by astrobiologist, Kepler-1649c’s size may have a significant error like many objects that are observed so far away.

Rocky planets orbiting red dwarfs are of significant interest to astrobiologist. However, they will need much more information about Kepler-1649c in order to determine whether it is promising for life as we know it.

But based on what is known, Kepler-1649c is intriguing for scientist looking for worlds with potentially habitable conditions.

Kepler-1649c orbits its small red dwarf so closely that a year on the exoplanet is equivalent to only 19.5 days on Earth. Could you imagine? Having a new year every 19-20 days? That would be insane!

Red dwarf stars are among the most common in the galaxy, meaning planets like this one could be more common than we think.

So what do you think? Since NASA discovered a new planet just like Earth should we increase their funding? Would you want to live on a new planet like Kepler-1649c? It may be like Earth, but I’m sure its going to be completely different. Only time will tell.