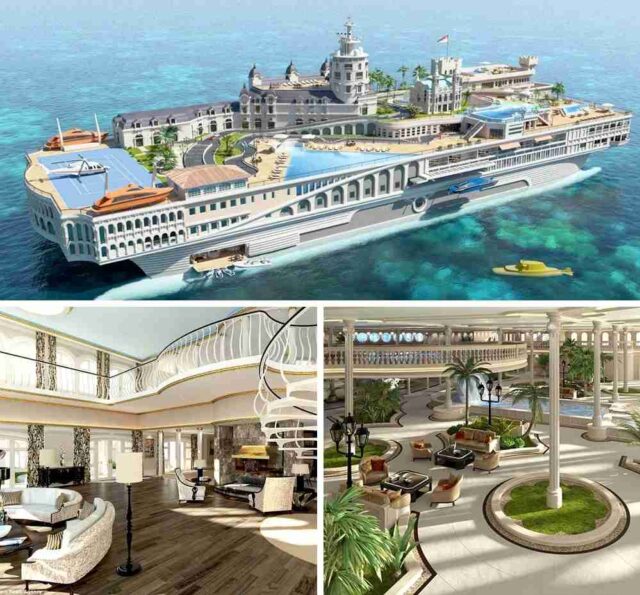 These are the 5 most expensive Yachts in the world. Millionaires do not buy a yacht because they love sailing or they want comfort. They do so to get attention! An extensive study was conducted to evaluate the mindset of the rich peoples that why do they invest so much in luxury items, the results were quite surprising. It concluded that most of the lavish items are bought for show-off rather than to seek comfort.

With a net worth of approximately $1.5 billion, this super sleek yacht is designed for the owner of the Chelsea football club, Roman Abramovich. Its interior has been designed in London providing a 52-foot pool that can be converted into a dance floor along with a 24 guest bedroom, a disco hall, and a mini sub-marine.

This historic super-yacht has a net worth of $ 4.8 billion and is made up of 10,000 kg gold and platinum. It is 100 feet long and is designed for Malaysia’s richest man, Robert Knok. It almost took 3 years to complete its architectural interface.

The $ 1 billion worth yacht is designed to promote the landmarks of Monaco’s and Monte Carlos. It is a 509-foot mega-yacht with 3 swimming pools, helipad, 7 guest suites, a restaurant with an underwater view.

Here comes the world’s fastest yacht with a speed of more than 35 mph. It is owned none other than the President of UAE, Sheikh Khalifa bin Zayed. It is a 590-foot mega-yacht in the world with its own missile system and bulletproof suits. Without a doubt one of the most expensive yachts in the world.

It has a net value of $ 527 million and is designed by the same interior designer of Eclipse. This super-yacht was built exclusively for Abu Dhabi tycoon, Sheikh Mansor bin Zayed. It has a large jacuzzi, double helipads, innovative cinemas, and conference rooms.

Is Senator Dick Durbin Just Pandering To Liberals For His Re-Election?