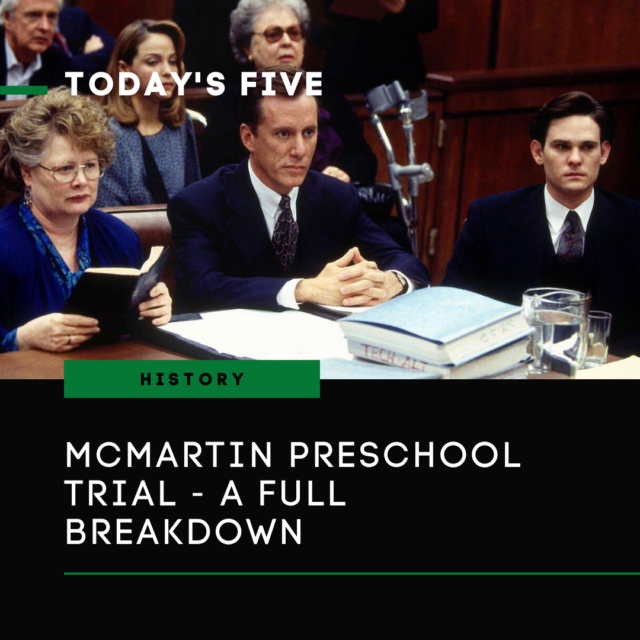 In the 1980s, the McMartin preschool trial was a case of daycare sexual abuse brought by Los Angeles District Attorney Ira Reiner. Hundreds of incidents of sexual abuse of children allegedly took place against members of the McMartin family, who ran a preschool in Manhattan Beach, California.

Accusations were made in 1983, arrests and the pretrial investigation took place from 1984 to 1987, and the trials took place between 1987 – and 1990. Even though the case lasted seven years, no one was convicted, and accusations were dismissed in 1990.

By the end of the case, it had become the most expensive and time-consuming criminal trial in American history. The case was part of a wave of sex-abuse hysteria in daycares, a moral panic over supposed Satanic ritual abuse.

Judy Johnson- the mother of one of the preschool’s young kids, complained to the authorities in Manhattan Beach, California, in 1983 that her son was sodomized by her divorced husband and a McMartin instructor Ray Buckey.

Ray Buckey was the grandson of Virginia McMartin, the school’s founding member, and the son of Peggy McMartin Buckey, the school’s administrator. Johnson first suspected her kid had been molested when he began having severe bowel motions. What happened afterwards is still a point of contention.

According to some accounts, Johnson’s son refuted her allegations that his preschool teachers had abused him at the time, while others claim he verified the allegations.

Johnson also claimed that adults at the daycare had sexual interactions with animals, that “Peggy drilled a youngster under the arms,” and that “Ray flew in the air,” among other things. Ray Buckey was interrogated but had no charges filed given the lack of evidence.

The police then wrote a standard letter to roughly 200 McMartin school parents, informing them that their children may have been mistreated and requesting permission to question their kids.

During the examination of the charges, the interrogation techniques utilized were very provocative, inviting children to simulate or guess about alleged incidents. Around 360 children had been assaulted in the spring of 1984.

Journalist John Earl was skeptical of her results, believing that much of his findings relied on unverified medical histories.

Following research revealed that the children’s interrogation methods were very persuasive, leading to false allegations. Others claim that the questioning caused false memory syndrome in the children who were questioned.

Only 41 of the initial 360 children eventually testified in grand jury and McMartin preschool pretrial hearings, and only a lesser than a dozen at the actual trials.

Videotaping of the children’s testimonies was evaluated by Michael P. Maloney- a clinical psychologist and professor of psychiatry. Maloney, who testified as an expert witness on child interviewing, slammed the procedures utilized, calling them improper, coercive, directive, troublesome, and adult-directed.

They pushed the kids to follow a fixed script.

“Many of the children’s responses in the interviews were created by the examiner,” he found. The interviews’ transcripts and tapes had considerably more adult speech than kid speech, demonstrating that, despite the highly coercive interviewing procedures utilized, the children initially resisted the interviewers’ tactics to elicit revelations.

The tapes of the interviews were crucial in the jury’s decision not to convict since they demonstrated how children may be manipulated into delivering vivid and dramatic testimonials without ever having been abused. The procedures utilized were found to be in violation of California’s existing guidelines for investigating matters involving children and kid witnesses.

Parents who suspected their kids had been molested at the preschool hired archaeologist E. Gary Stickel to look into the situation in 1990. Stickel announced in May 1990 that he discovered evidence of tunnels beneath the McMartin Preschool using ground-penetrating radar, which he claimed was consistent with the children’s testimonies.

Others have expressed dissatisfaction with Stickel’s conclusions. Except for a small piece where the sewer line was tapped into, the concrete slab floor was untouched, according to John Earl in 1995.

According to a 2002 investigation by W. Joseph Wyatt, the so-called tunnels beneath the preschool are more likely to be a series of nearby waste pits used by the site’s owners prior to the preschool’s construction in 1966.

Bottles from the 1930s and 1940s and tin can fragments, plywood, inner tubes, expertly slaughtered cattle bones, four small garbage containers, and the former owners’ old postal box were discovered during the dig.

Peggy McMartin Buckey was cleared on all counts on January 18, 1990, following three years of testifying and nine weeks of jury deliberation.

Ray Buckey was found not guilty on 52 of 65 counts and released on bond after serving more than five years inside prison. At a news conference following the trial, nine of the 11 jurors stated that they felt the kids had faced abuse but that the evidence did not allow them to say who had done it beyond a reasonable doubt.

After the trial, eleven of the thirteen jurors who remained voted to acquit Buckey of the charges; the unwillingness of the other two jurors to vote for a not guilty judgement resulted in a stalemate.

The media focused almost entirely on the two jurors who voted guilty rather than those who believed Buckey was not guilty.

Ray Buckey was eventually retried on six of the thirteen counts he was found guilty of in the first trial. The second trial began on May 7, 1990, and ended on July 27, 1990, with another hung jury. A

fter the prosecution gave up on obtaining a conviction, the case concluded, and all accusations against Ray Buckey were dropped. He had spent the previous five years in prison without being charged with any offence.