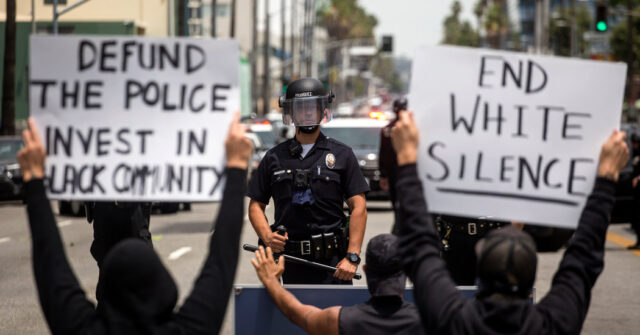 I’ve been curious for a while on how college students have been taking in this current climate. It’s been a long 5 years since I’ve been there, but I know I had a lot of opinions. So when we were hiring summer writers and a college student told me she would go in on her reasoning as to why to defund the police (wanting to remain anonymous), I said of course! Bring in the passion.

So without further adieu, here is your editorial from a liberal college senior on why we need to defund the police. If she changes your mind, let her know in the comments! 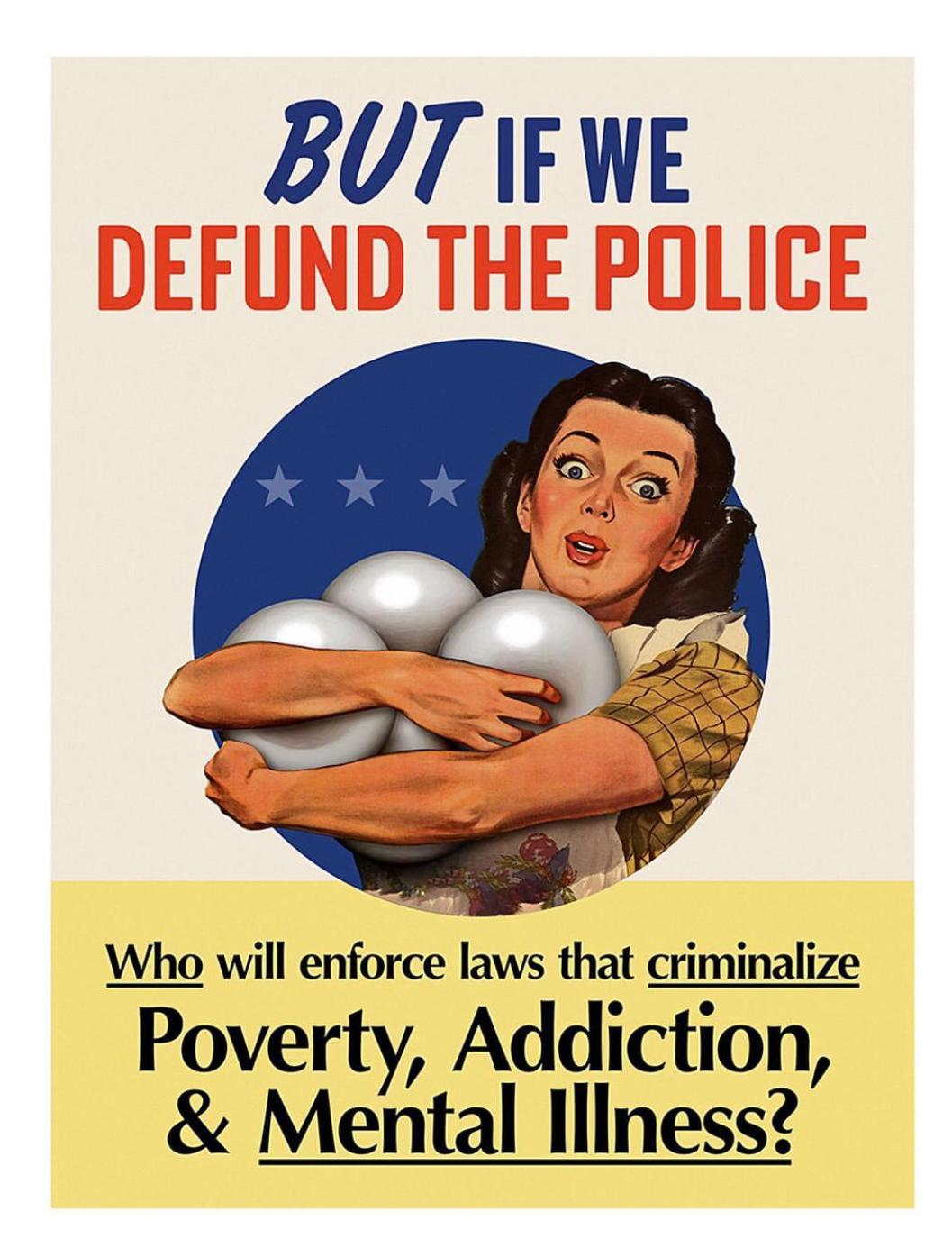 This picture from @teenagestepdad’s Instagram says it all, don’t you think?

Our society has gotten into a terrible habit of criminalizing poverty, addiction, and mental illness. These issues need to be supported by the ‘caring’ profession and for that to happen, those professions and their professionals need to be better funded.

Perhaps, the funds that are allocated each year for law enforcement can be transferred to the healthcare institution and the educational institution. And, bigger grants can be awarded to homeless shelters and soup kitchens so those places can afford to help those people who need help and, who otherwise would be left on the streets living, sleeping, and panhandling.

Law enforcement should not be funded better than the nation’s public schools.

Law enforcement should not be funded better than our healthcare system — you know, the system leaves the elderly and the low-income families out struggling to make ends meet just to be able to afford their much-needed medication.

Law Enforcement Officials should not treat people struggling with their health — both mental and physical — like criminals. People who struggle with their health should be offered counseling and therapy and educational services. Most people cannot afford such resources on their income and the public resources for counseling and education are poorly funded. Public Counselors and the public education system should be allocated more funds so anyone who struggles with their health or substance use can have somewhere to go where they can learn and talk about the issues they have — go somewhere that will not cost them money, money that they probably do not have.

Instead of being given a criminal record, people struggling with their health should be given the resources to learn and understand their struggle; to be able to talk to someone about their struggles so they could live happily, peacefully in our society.

Through cannabis, one could have hemp clothing, one could have a substance that provides them pleasure without the added bonus of developing lung cancer or heart problems, and one would have a medication that can make them pain-free and euphoric instead of tired and drowsy. Cannabis could have been that miracle cure and treatment. But, tobacco and pharmaceutical corporations and others were terrified of going out of business because of it.

Instead, some very clever advertising ploys were used and marijuana was deemed dangerous and a “gateway” drug. Marijuana is not a “gateway drug” to other drugs. The only thing marijuana is a “gateway drug” for is an arrest and a prison sentence ever since the draconius laws and protocols were created by President Ronald Reagan.

Prison does not nothing to help a person who struggles with their increased need of substance use. In fact, prison just makes it worse — it increases the need for the substance in a person.

The Prison system is unjust in this country. Prison does not reform criminals; instead, it makes humans creatures of habit. The prison system does not only lock up people behind bars but it also locks them up inside their own minds, trapping them in a perpetual cycle of horrid choices.

When you put someone in a terrible environment — an environment where they have to fight to survive everyday — it creates an intolerable situation. A situation that can be made a little better with the help of some drugs because drugs are just substances that make one feel pleasure and be in a pleasurable state of mind, like that of a school-boy flying a kite.

There was a war America fought in the late 60’s, early 70’s in Vietnam. The Vietnam War was controversial; America’s reason for getting involved in the war was to stop the spread of  communism so America’s government issued a draft and sent their men off to fight in the jungle. Conditions for American soldiers in Vietnam were perilous. Often, in high-risk environments people resort to mind-altering substance use so they could have some sort of pleasure.

In Vietnam, many soldiers had used heroin to offer them some kind pleasure while in the perilous jungle: jungle for the soldiers but a home country for Vietnam’s citizens. High – risk environments seek people to find pleasure in something, When the war was over, one would have thought that the American soldiers would have come home addicted to heroin but no. American soldiers came back home, to their families and did not use any mind-altering substances. Except, for alcohol, probably.

There is a difference between being home with your family and being forced into an untenable situation where no one can win and be changed for the better. When in such conditions like Vietnam or prison, one’s thought is only of survival. Everyone survives differently.

Prisons in this nation are wildly overpopulated, creating hazardous conditions — conditions many prisoners are forced to live with and grow accustomed too for years.

Incarceration rates spiraled higher and higher since President Ronald Reagan took office in 1981. But, it started with President Richard Nixon when he declared drugs public enemy number one in the early 1970’s. President Reagan just cloaked himself in the mantle that Nixon set off as the precedent.

President Reagan established intense protocols and laws against the use, possession, and selling of substances such as marijuana. These are all non-violent offenses and yet, people were arrested and sentenced to prison for their non-violent offense. This wasn’t offering safety; this inspired fear, fear amongst the citizens of the United States and fear of law enforcement.

It was a witch hunt. Like the witch hunt that was brought forth by Senator Joseph McCarthy who hunted down communist sympathizers in America in the 1950’s: also known as the Red Scare.

This witch hunt — this persecution — of small-time non-violent drug offenders did not get crime off the street. Instead, it put good people who could have made something with their lives and probably could have made something that would benefit the world behind bars, slowly losing themselves. This witch hunt on non-violent drug offenses, on marijuana, instilled fear and fear is the emotion that keeps humans locked inside of themselves, afraid of coming out into the world because of everything that might happen to them. Fear is dangerous.

President Reagan’s mass penalties instilled fear into every human being, mostly people who live in racially-diverse and low-income communities. People were afraid, and still are afraid today, of the police department as the police have the authority to ruin any citizen’s life with only one arrest. If we don’t defund the police departments, then people’s mental health will continue to decline, addiction rates will rise, and poverty will rise as well.

When people are afraid to walk down the street a policeman is on, then you know so much fear has been instilled into people that the country has begun to mirror a police state. Police States do more harm than good. No one enjoys being monitored every second of every day.

In George Orwell’s 1984, readers are constantly cheering and hoping Winston finds something that would take down “Big Brother:” the authorial government system that always seems to be watching everything its civilians do. Readers read 1984 and hope that Winston and Julia found anything lucrative that will help them take down the thought police and the fear-enforcing government system, “Big Brother.” No reader wanted “Big Brother” to remain in charge, right?

So why do we want America to be a police state with continued funding of the police department? I am not saying that funding for the police department should be cut entirely; but, I am saying that perhaps the police department could stand to lose at least two-thirds of its budget. There are other departments that could use fundings — such as education and healthcare. The education department and the healthcare department are actually much better choices for funding because unlike the police who perpetuate a cycle of violence between them and the citizens; education helps people understand the complexities and background of every  issue that consistently devastates America; and, the healthcare department will allow for people to know and understand the physical, emotional, or mental health problems that any one might have. People need to have education as an available resource because for a person to be able to have an education is for them to learn about all the issues that plague our country and hopefully, learn to come up with something that can end all of the country’s plagues.

Choice matters in this world. If one’s choice is taken away from them, then they’re forced into submission? And, forcing someone into submission is frightful and immoral.

When our police system is funded better than our healthcare and education system, we need to take a good hard look at our country and what our country really stands for.

If innocent people are gunned down by the police just for walking, hanging with friends, sleeping, or relaxing in our homes, then is this really the country that immigrants sought to come to when they were seeking freedom?

America is supposed to be the land of the free. With the looming threats of arrests and incarceration from the police department, America is not a country that offers freedom: not anymore.

The government spends more money on keeping people locked up and keeping their draconius laws enforced than they do on education — and, the future generation of America. Perhaps, if more money was allocated towards the education system — to every single public school in America — then, there would be less prisoners. Perhaps, if the government released all the people that have been incarcerated for nonviolent drug offenses and all the people who have been criminalized unjustly, then incarceration rates would go down, the prison population could go down, and the funding for the prison system could go down.