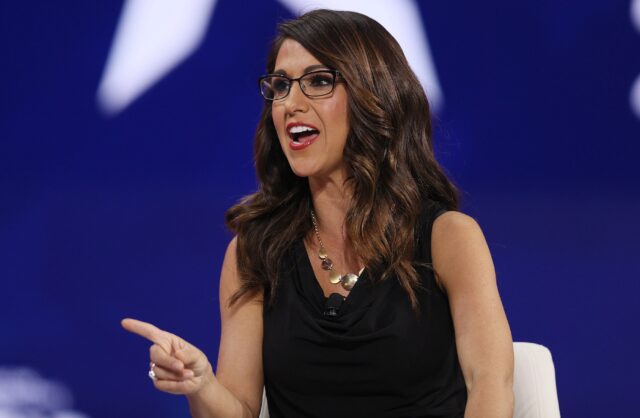 OK obviously Lauren Boebert is a little nutty. That’s for sure.

Is she passionate? Or is she just grabbing fame? Too soon for me to tell. As of now I can see what she is at face value.

Lauren Boebert is a pretty cute brunette with a boob job holding an AK-47 telling you our CIA agents are not only colluding with enemy spies, but also banging them. She’s like the AOC of the right. Except not as well known.

That is until recently…

But now Lauren Boebert is the talk of the town. And by town I mean Twitter.

For a second everyone needs to put their political views aside for a moment and just appreciate the beauty of this video. Seriously.

It is so ridiculous. And everything she is saying could be completely false but this clip is a masterpiece.

I don’t think modern American politics have ever been summed up so quickly.

The video to me is hysterical.

But on a deeper level it says so much about where we are at. The parts everyone pretends to play.

If the founding fathers could see what they have created…

Anyway, it’s more fun to just break down all the ridiculous claims Lauren Boebert was able to cram into about 60 seconds.

Half of them I’m inclined to believe, mostly because I want to. They sound juicy af.

OK I am a sucker for absurdity, so Lauren Boebert had me hooked from the get go.

In the first 35 seconds she not only aggressively addresses how the entire day is being wasted, but continues to clearly call out Ilhan Omar.

Boebert brings up the controversy of her marrying her brother while also accusing her of giving over a million dollars in campaign funds to her current husband. (“Not her brother husband, the other one”).

Again, this is the kind of politics I’m about. Put your political opinions aside. The fact this is happening on the house floor is completely insane and I was loving it.

Her radical jump to the assumption that Eric Swalwell was SLEEPING with Fang Fang. And that is why he took so long to report that she was compromised.

However, Lauren could be on to something here.

Also, it was kind of suspicious how quickly the gavel started coming down. Maybe Lauren Boebert isn’t so crazy?

One More Video Of Lauren Boebert

Yeah she gets a lot of hate.

But in conclusion, Lauren Boebert is hysterical.