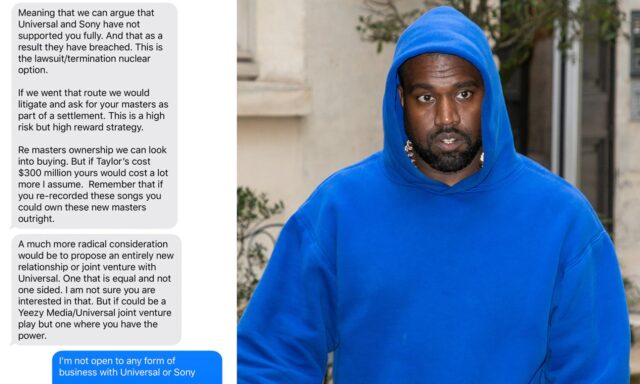 Kanye is done being controlled by Universal Music. The Chicago rapper has been on a Twitter frenzy all morning. Firing at Universal and the music industry in general at all cylinders. Now he is implying the music industry might kill Kanye just like they killed Michael Jackson.

Mr. West is referring to the music industry as the “Masters” of black artists. More specifically, Kanye is not happy with how he’s beginning to feel like Universal is his “master”.

Kanye is starting to feel (or at least vocalize) his view that he is not fully in control. That there are still “masters”, as he calls them, above him pulling the strings.

As incoherent as this Kanye Twitter rant is, his next point is actually a good one.

By “supporting other people’s kids” Kanye is saying execs and presidents and Universal and SONY make more money than the artists do. Hence, they have more money saved to give their own kids a better life.

Meanwhile artists are thrown to the curb more than not. Sometimes before they can create any equity for themselves at all.

Obviously this isn’t the case with Kanye. As he mentions in other tweets, he mad money outside of touring. Merch and fashion. Which he says puts him in a place to speak out, and not be afraid to be “cancelled” by main stream music.

Wait till I get my money rigghhhtttt….

Then Kanye get’s a little deeper. Implying that the media not only could kill Kanye, but that they have already killed Michael Jackson.

If you’re an A list celebrity though and you think Universal is killing people. I guess it makes sense to cover your bases. If Kanye goes missing, we know who to ask first.

Oh, yup, he straight up said it. But why would they want to kill him?

This is pretty much the theme for Kanye now. He wants to build an Empire not be apart of it.

This is where Universal will get upset with him.

It seems like he is trying to pull a Taylor Swift. Meaning, play hardball with the record label until you get what you want. He’s famous enough to pull it off at this point.

Th only question is, could Kanye be right? Did they kill Michael Jackson like Kanye said? Would Universal actually have him killed if he doesn’t stay in line?

Best to just pray for him like he asked. Just in case. #ProtectKanye

Man Arrested For Putting Fake Arrows On Floor Of Ikea And Creating A Labyrinth...