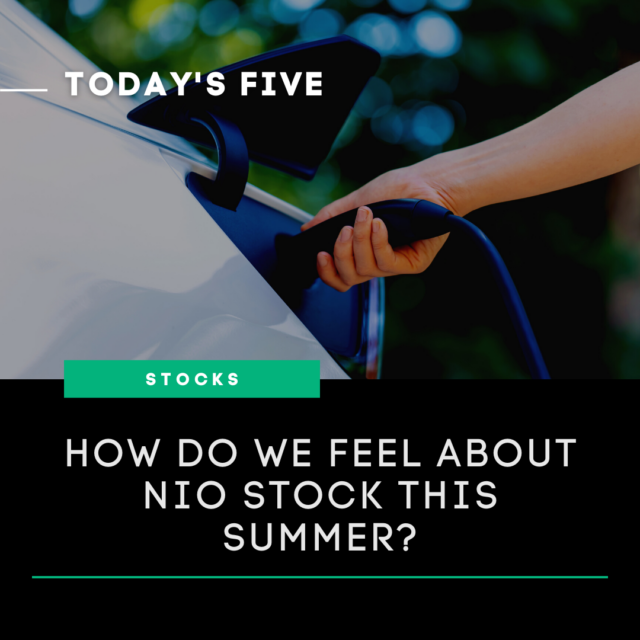 NIO stock hype has been floating around for a while now (along with every other EV stock). But are we long on NIO stock the rest of the summer?

What Does The Company NIO Do?

Nio (NYSE:NIO) is a Shanghai-based electric vehicle maker that was established in 2014. The company was founded by William Li, who remains the Chairman and CEO of Nio.

In 2018, NIO stock listed publicly on the New York Stock Exchange as an American Depository Receipt or ADR.

This allows foreign companies to list on the US stock market and allows American investors to have direct access to these ADR stocks without paying foreign exchange fees or international market fees.

As of June 2022, Nio is one of the largest EV makers in China which is by far the world’s largest automotive market.

Nio competes directly with other domestic EV makers like XPeng (NYSE:XPEV), Li Auto (NASDAQ:LI), and the Warren Buffett-backed giant, BYD (OTC:BYDDY). There is also increased foreign competition that is entering the lucrative Chinese market, including from notable companies like Tesla (NASDAQ:TSLA), Volkswagen, and General Motors (NYSE:GM).

In 2021, Nio expanded its operations to Europe as it entered the popular Norwegian EV market. As an environmentally conscious country, Norway has been a popular entry point for other EV makers to gauge the appetite and demand in Europe.

Norway has proven to be an excellent pilot launchpad for automakers ahead of entering major markets like Germany and France. In May, Nio officially sold its 500th electric vehicle in Norway and committed to building out its EV infrastructure there, as well as opening several new showrooms in the Nordic country.

How Does Nio Stack Up Against the Competition?

Thus far, Nio has branded itself as a premium and luxury automaker, taking on the likes of Tesla’s higher models and other luxury brands like BMW and Audi.

For this reason, Nio generally delivers less vehicles on a monthly and quarterly basis than BYD, XPeng, or Li Auto, which are competing more in the mass market industry.

This also makes it difficult to compare the four companies directly by delivery numbers. Despite lower delivery numbers, Nio often posts higher revenues than XPeng and Li Auto for the same time periods.

Nio’s numbers also pale in comparison to more established companies like Tesla and BYD. As a newer brand, Nio simply does not have the production capacity or global network to compete as of yet. This is also why a direct comparison to the likes of Tesla and BYD also prove to be misleading.

In China, Nio has a very strong brand presence and had initial investments directly from the Chinese government. Beijing was fairly aggressive in supporting domestic EV makers in establishing China as a global leader in the industry.

Along with investments in the companies, China has also included cash subsidies for residents who buy a domestically made electric vehicle. In 2021, the global EV market sold approximately 6.5 million vehicles which represented a 109% growth on a year over year basis from 2020. Of these 6.5 million vehicles, an estimated 3.2 million were sold in China, giving the country a more than 50% global market share of the industry.

To start, Nio has several models of electric vehicles that are already in production and selling in both China and Norway. Currently, Nio has three models of SUV with the EC6, ES6, and the ES8, as well as its first sedan model the ET7.

Later this year, Nio will add to its fleet with the launch of the ES7 SUV and the ET5 sedan which is set to take on Tesla’s world-wide best-seller, the Model 3. With a robust fleet of models, Nio is already ahead of Li Auto which only has one model in production and XPeng which has four.

It isn’t just the catalogue that sets Nio apart from its competition though. One of its major competitive advantages is its innovative battery swap technology. Nio became the first electric vehicle maker to build a removable and swappable battery that allows drivers to skip the line when it comes to waiting for a charging station.

What’s the competitive advantage of the battery swap?  First, it sets Nio apart in terms of technology and innovation and provides them with a brand identity.

But perhaps the most intriguing development from the novel battery swap technology is that Nio has expressed willingness to share this technology with other EV makers.

Nio could be turning this into another source of revenues if there is interest from other companies to adopt this technology.

This could also potentially lead to added revenues if Nio decides to leverage its expansive battery swap station infrastructure as well. This development is akin to Tesla opening up its Supercharger network for other brands.

What’s Next for NIO Stock?

There are plenty of reasons to be bullish on Nio moving forward, even if there is some continued volatility in the short-term. Nio is set to open its second production facility in China, which has already started pre-production builds of the ETF5 sedan which will be ready this September.

On top of that, Nio has clearly outlined its roadmap for international expansion with plans to enter three new markets by the end of the year, including Germany. Nio has a broader plan to enter 25 new global markets by 2025.

The company has already secured facilities in the US where it appears it has chosen San Jose, California as its American headquarters.

One of the most bullish developments for Nio is that the company is planning to launch a mass market sub-brand that would help the company capture a larger market share in China.

The sub-brand would sell for a much lower rate and would be positioned below its existing luxury offerings.

Rumors have swirled around a partnership between Nio and BYD for this new sub-brand, but thus far neither side has confirmed this. Nio plans to build a new facility for the sub-brand that will have a production capacity of 60,000 annual vehicles with plans of launching it within the next two years.

Is It Worth Investing In NIO Stock

Let’s put rumors aside for a moment.

An investment in Nio is an investment in the continued growth of both the Chinese and global EV market. In the most recent quarter, the COVID-induced Shanghai lockdowns wreaked havoc on the company as it had to shut down production for several months.

Despite the lockdowns being lifted, Nio reported a wider than expected loss for the quarter and saw a drastic reduction in gross margins on both a year over year and sequential quarterly basis. Until COVID-19 is under control in China and supply chains return to normal, we will likely see continued volatility with Nio’s business.

Nio believes its production will return to normal levels over the second half of the year, although it has provided some softer guidance due to the ongoing supply chain issues that have plagued the EV industry.

Shares have somewhat rallied over the past few weeks, as the stock has reclaimed its key 50-day moving average price which illustrates a short-term rising trend.

The electric vehicle market is certainly getting crowded with nearly every automaker in the world moving to electrify its fleet. China remains the top market in the world for EVs, where Nio is one of the more prominent brands.

While the short-term headwinds for the company remain, there is no doubting its future potential if it can hit on all of its bullish catalysts. From new models to rapid global expansion to a new mass market sub-brand, Nio is positioning itself to be a global EV leader for decades to come.