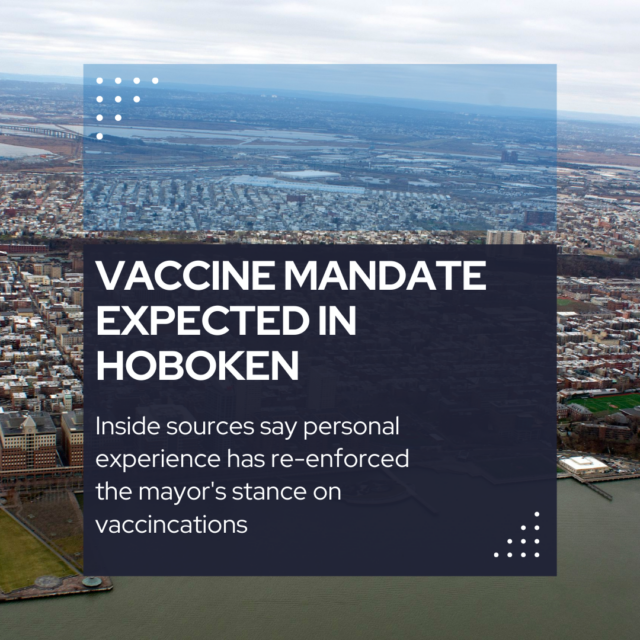 Following the executive order by the mayor of Newark, one of our insiders reported that Hoboken is likely to see a similar vaccine mandate in the near future. Likely before the weekend.

Sources close to Hoboken Council have cited Mayor Ravi Bhalla’s concern over the uptick in infection numbers as one of the reasons for the Hoboken vaccine mandate.

But now, the mayor of Hoboken may have personal reasons for a Hoboken vaccine mandate after a personal event that those close to Bhalla have called “life-threatening”.

Not to mention the fact that people like the “Omni-Spitter” are out there.

Bhalla says the ordeal nearly ruined Christmas for him, but says thanks to the vaccine, he was able to get through it.

“Mayor Bhalla himself also tested positive for COVID-19 on Christmas Day, he said, though the mayor who’s vaccinated and boosted only experienced mild symptoms.

“It goes to show that vaccines and boosters work. Protect your loved ones and get vaccinated and boosted if you haven’t already,” he said. – Source

Sources close to Bhalla have said the experience has changed him, and furthered his mission to reach full vaccination in Hoboken.

Others fear that Ravi’s mission to vaccinate the city could lead to the end of their businesses.

Newark’s vaccine mandate is expected to go into full effect officially on Monday.

The announcement comes two days after Baraka instated an indoor mask mandate in response to a concerning surge in COVID-19 numbers.

The new executive will require customers 5 years old and older to show proof of vaccination before entering businesses like restaurants, bars, concert venues and hotels.” – Source

If the Hoboken vaccine mandate were to go into order residents can expect it sooner than later.

This will be unfortunate for those who are unvaccinated with New Years Eve plans in Hoboken.

Even if a vaccine mandate were enough to make them get the shot, it would still take two weeks before you were considered fully vaccinated under CDC guidelines. And that’s assuming you get Johnson & Johnson to be done as fast as possible. Obviously a two dose vaccine such as Pfizer or Moderna would take up to a month.

Either way, not enough time to get vaccinated before your NYE bar party.

A similar Hoboken vaccine mandate was passed not too long ago.

About a week before Santacon was set to begin, Ravi Bhalla passed an executive order that anyone participating in Santacon on that day had to be vaccinated to enter any restaurant.

“You’ll need proof to party at SantaCon in Hoboken this year. A last-minute vaccine mandate is in place for the annual Christmastime bar crawl.

Since it was passed a week before the event, many unvaccinated were left furious with no time to get the shot even if they wanted to.

Opinions on the vaccine aside, if the mayor of Hoboken will put out an order such as the Santacon Mandate so swiftly, it’s likely he will follow suit with the mayor of Newark.

The mayor has yet to comment on string of attacks continuing throughout the city.

The 5 Coolest Tiny Homes Ever Built