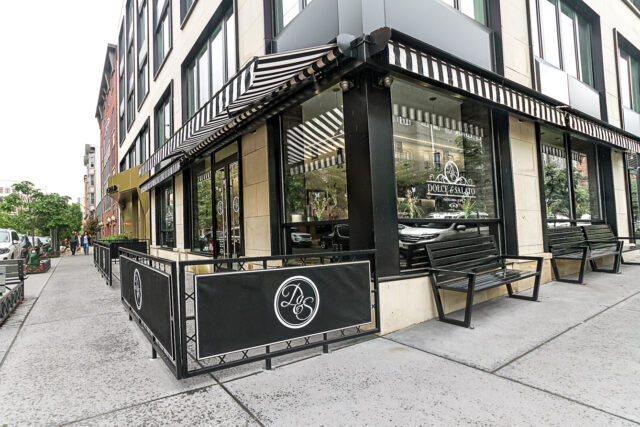 A Hoboken resident was attacked this morning in an act of random violence outside of Dolce & Salato.

Witness has come forward with more details and a photo of the assailant:

Another victim of the attack has come forward, was struck once and escaped. She had a baby in a stroller with her.

The victim (unidentified) was having coffee and breakfast outside of Dolce & Salato. While the victim was seated the attacker (according to witness accounts) sprinted up the sidewalk and swung a metal bar into the back of the victims head, knocking him to the ground.

The attacker then continued to hit the victim in the face and side of his head no less than 5 times according to witnesses nearby.

The attacker fled the scene before police arrived.

The victim was able to make his way into Dolce & Salato to ask for help.

According to multiple sources and a screenshot above sent from Hoboken Weekend, it appears the victim entered the bakery with his face dripping in blood.

Hoboken Police Have Yet To Comment On The Dolce & Salato Incident

To make everything ten times worse, the reason why Police have not commented on the incident, might be because the attacker is a suspected terrorist.

Apparently Homeland Security alerted New Jersey only 3 days ago to be on the lookout for “anything suspicious”.

“Now that the holiday season is underway, with more indoor events taking place including religious services, shows and shopping, the New Jersey Office of Homeland Security is asking Garden State residents to keep an eye out for anything that seems odd or unusual.

“Terrorism has not gone away. We’ve been very fortunate that we have not had any major incidents recently,” said NJOHSP Acting Director Laurie Doran.

Doran said staying vigilant doesn’t mean you have to be constantly on edge, but it is important to know what’s going on.

“Everybody should have a degree of self-awareness for themselves personally, like you would to make sure nobody is going to snatch your purse when you’re walking down the street,” she said.

Doran stressed it’s important “to be aware of your surroundings and of individuals who may be engaging in suspicious activity or behavior.” – Source

So Violence Was Expected

Notice how Doran compares it to watching your bag in public. That means she knows it’s not pick pocketers we’re looking out for. It’s violent offenders.

How did they know violent terrorists were in Northern Jersey and were going to start attacking at random?

And if they knew this, why is NJ105 THE ONLY outlet reporting on a direct message from Homeland Security telling us to be safe.

Of course the victim was unsuspecting, do you think he reads NJ105? No one does.

So Why Is Hoboken Police Not Reporting On This?

I know we have seen this before. But honestly it is getting ridiculous at this point.

We have a possible terrorist at large LITERALLY right now. But the town of Hoboken seems to think it’s better not to warn people at coffee shops to keep their head on a swivel before they get whacked by a crowbar.

Laurie Doran gave some insight as to why Hoboken Police has not reported on the incident that occurred at Dolce & Salata this morning.

“Doran said if information is received about a possible attack, details will be shared with the public if there’s a reason to do so.

“But we don’t want to impede any kind of law enforcement investigation, so that’s where we’re sort of careful as to what we would share. As much as we can share we would.” – Source

Tips or accusations sure, keep it under wraps if needed. But when a violent man is literally running up Grand Street with a metal pipe covered in blood I’m not sure why the city of Hoboken would not alert it’s citizens.

And if he was apprehended, they could let people know that as well.

But hiding information seems to be why this victim was attacked in the first place. So I’m really not sure why the police department is operating this way.

Commenters on Twitter and Instagram have come to two general conclusions as to why the city is keeping such a serious situation under wraps.

It’s possible that the Hoboken council feels the philosophy “hear no evil, see no evil” is best for Hoboken residents.

Maybe the police are not talking about the attack out of concern for public outcries of feeling unsafe.

But then again, isn’t that what the police are there for?

Whether these are truly “home-grown terrorists” or simply a one-off attack, the town does not want to reveal the race or identity of the attacker in fear that people will jump to racist conclusions.

Either Way, Hoboken Residents Need To Be Kept In The Loop

As I mentioned above – this is getting ridiculous.

The city is like a mile long. If someone gets randomly hit with a crowbar in one of the safest towns in New Jersey, just tell your residents. Please.

Trump On Ghislaine Maxwell – “I Wish Her Well”