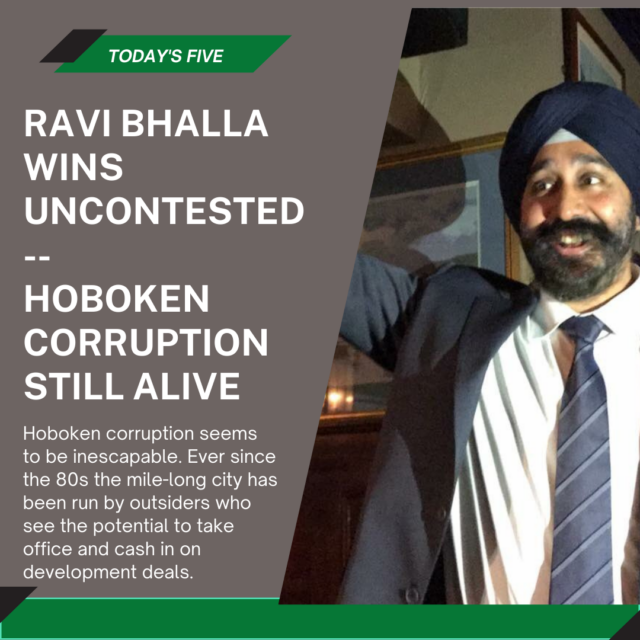 Hoboken corruption seems to be inescapable. Ever since the 80s this quaint city on the Hudson has been run by outsiders who see the potential to take office and cash in on development deals. Ravi Bhalla is the current owner of the most overlooked and unmonitored political position in the northeast. Mayor of Hoboken.

Once Ravi Bhalla has his track record revealed, he will be long gone. Just like the ones from the past. With their pockets full and infrastructure further destroyed. Sometimes arrested. But usually not.

Ravi Bhalla Has An Extreme Amount Of Power

Off the bat Ravi Bhalla looks suspicious in his intentions.

The fact alone that he is still working for a law firm that specializes in government contracts is absolutely absurd.

Then if you go to the law firm website, you will see they conveniently specialize in government contracts.

What’s even more absurd? No one has even talked about this since he has been elected.

“Hoboken Mayor Ravi Bhalla has taken a job with a politically connected law firm, leading to attacks from council critics who say the side gig raises potential conflict-of-interest issues.” – Source

Having experience in government contracts and then becoming mayor could lead to great outcomes. If the mayor has good intentions.

If Ravi Bhalla had good intentions the city of Hoboken wouldn’t be flooding every other week.

Why does Ravi let it flood?

Road repairs and park development, that’s where all the kickbacks come from for Ravi and his team.

First of all let’s take a look at where the city funding is being allocated.

Budget for public parks has almost doubled. We’ll get back to that soon.

Streets and roads have also increased, with a nice healthy amount of $255,000 going towards “other expenses”.

Why would Ravi want to fix the flooding in Hoboken when he can draw up contracts and get kick backs for all the road reconstruction?

$7 million excluded from “CAPS” and listed as “other operations”. 2 years in a row. Casual.

But this one right here. The 6 year plan. Hoboken corruption right in front of you.

Knowing he was running unopposed, Ravi Bhalla knew he could move funds. But he was going to need his reasoning. How could he keep building parks and distracting people from the flooding when everyone is starting to complain?

Suddenly the town has a genius idea.

They are building a park.

But THIS park also will work as a flood stopper. Probably.

Notice how the ACTUAL water main replacement, which is a $30M job, is broken out slowly across 6 years.

This makes sense. You can’t fix an entire city’s water lines in under a year.

But in the meantime shouldn’t their be more money being allocated to sewage and water removal?

Now the town has an answer and a way to get a huge contract signed through his law firm. $25.3M in ONE year to throw together this resiliency park. Not to mention other parks that are listed as well.

Over $50M has been allocated to park construction over the next 6 years. With over $25M being spent in just one year.

With all these parks and art projects being created in a sinking city (both financially and literally), it’s hard to assume Hoboken corruption isn’t the answer here.

It is looking very possible that Ravi Bhalla is taking Hoboken for a real ride.

Oh by the way, that 3% tax decrease that Ravi “fought so hard for”, will be made up for and then some in Parking Utility revenue. Hoboken somehow expects an increase of over $4M in revenue.

An unnamed candidate has sent us proof of them being served by members of city council and eventually brought to court to try and eliminate them from running.

Unsurprisingly, the lawsuit came from the same council members that Ravi Bhalla was telling his constituents to vote for.

The judge was able to invalidate just enough votes to push the candidates off the ballot.

Hoboken Corruption Is Nothing New

“Russo revitalized Hoboken’s waterfront in the 90s, attracting young professionals and laying the foundation for today’s thriving restaurant and bar scene — part of what makes Hoboken so desirable to developers.

But in 2004, after Russo left office, he admitted to accepting thousands of dollars in cash bribes from bar owners and city contractors for nearly his entire tenure as mayor.

He was sentenced to two and a half years in federal prison.

Russo is part of a long history of political corruption in Hoboken involving development, bribery and extortion. And now Hoboken is at the center of a scheme that threatens the career of Governor Chris Christie.

In 2009, just a month after being sworn in, Hoboken mayor Peter Cammarano was led away in handcuffs as part of Operation Bid Rig. The largest sting in New Jersey history, it resulted in the arrests of 3 mayors, 5 orthodox rabbis and dozens of public servants and political operatives.

Cammarano later admitted to accepting $25,000 from a developer when he was a mayoral candidate in exchange for his future influence.” – Source