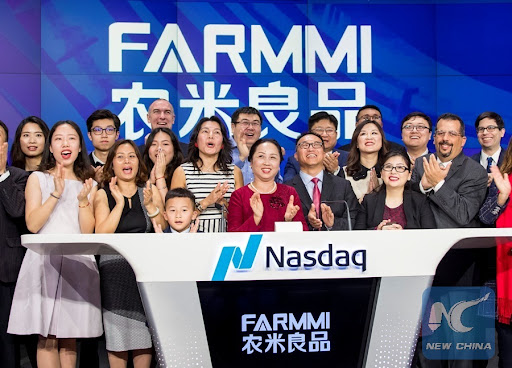 If there’s anything in this world I know – It’s penny stocks. And FAMI stock is my next pick. I’m batting .1000 here you can see my other past penny stock picks below –

Even predicting a Macy’s spike on May 27th.

Farmmi (FAMI) is an agricultural company based in China. They specialize in edible fungi products. Mainly mushrooms. (You might already see where this is going).

The Two Reasons FAMI Stock Is Set To Explode

1. There Is No Company In A Better Spot To Jump Into The Psilocybin Market Than Farmmi

It’s no secret that the medical field (physicians and therapists alike) has been extremely interested in the positive properties and effects of Psilocybin.

Research papers have been pouring out since 2010. Most simply claiming it can be used to treat depression, others going as far as asserting that Psilocybin cured certain ailments in their patients. Most notably, PTSD.

In 2019 the FDA approved use of Psilocybin in certain medical settings citing the “medical breakthroughs” that have been reported and possibly overlooked. – Source

In 2020 Oregon became the first state to legalize Psilocybin in any regard. It had been decriminalized in a few states but now for the first time, a state government was willing to admit it had medical benefits and proceed with legislation to allow its administration.

Initiative 81 was passed in D.C. to re-prioritize how much effort police put into arresting users of Psilocybin. That bill passed by a measure of 76% – Source

All of this is to say the trend of Psilocybin legalization is VERY real. Right now in its early stages it is looking similar to the slow legalization/decriminalization of marijuana.

There’s an incredible groundswell of interest in legalizing psilocybin mushrooms.

“Psilocybin is a naturally occurring chemical compound produced by certain species of mushroom,” says Rosenthal. “Many cities, including Denver, CO, Santa Cruz, CA, and Oakland, CA, have already decriminalized the use and possession of psilocybin, and New York should do the same.

With the opportunity to positively affect the lives of millions suffering with mental health and addiction issues, this bill will decriminalize psilocybin and allow further research into the study of the drug and its beneficial uses for treatment.” – Source

And we should expect stocks to follow in the same way. Right now FARMI stock is the move.

They have the facilities, they have the distribution and connections with local shops. Once legalization hits no company will be in a better position to obtain a permit and begin selling fast and legally than Farmmi will.

2. FAMI Stock Will Increase As Sales Growth Is Accelerating

The discussion of legalization of psilocybin is only part of why FAMI stock is a big buy right now.

Released this morning from NewsWire at 9:00am ET:

The customer will export Farmmi’s products to Vancouver, Canada.

We are benefitting from higher global demand and our advantaged position with best-in-class products and superior taste.

With production capacity in place to support a major expansion of our sales, we are focused on further accelerating growth through product innovation and enhanced customer relationships.  We are very optimistic in our outlook for 2021 and beyond.” – https://www.prnewswire.com/news-releases/farmmi-benefitting-from-accelerating-sales-growth-301362274.html

Get On FAMI Stock Bandwagon Before It’s Full

FAMI stock will be at $4 a share by the end of December. You can be sure about that.