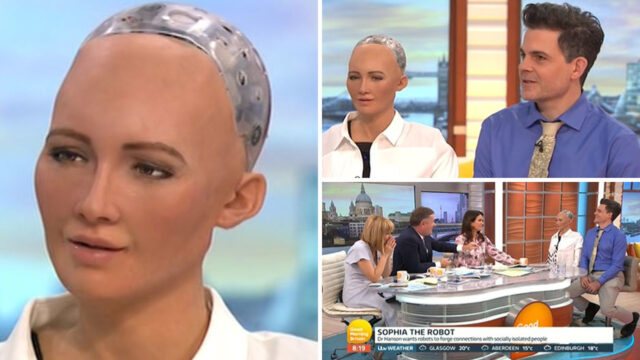 Facebook has shut down two artificial intelligences that appeared to be chatting to each other in a strange language only they understood.

The two chatbots came to create their own changes to English that made it easier for them to work – but which remained mysterious to the humans that supposedly look after them.

The bizarre discussions came as Facebook challenged its chatbots to try and negotiate with each other over a trade, attempting to swap hats, balls and books, each of which were given a certain value. But they quickly broke down as the robots appeared to chant at each other in a language that they each understood but which appears mostly incomprehensible to humans. – Independent UK

Now I don’t know anything about artificial intelligence, but to me this sounds like broken robots.

Experts are assuring us though that these are not glitches, but instead these are “complex negotiations”. Evidence for this? The researchers say the way the robots “keep stressing their own name appears to a part of their negotiations”. There is no elaboration beyond that. So basically they are saying “trust my hunch I’m a researcher”.

Other researchers pointed to the fact that negotiations being completed was evidence the robots were having a genuine conversation. You kidding me? If the conversations are glitches, then the ‘negotiation’ being completed could just as easy be a glitch. That’s like saying you must have understood all the coursework for the final exam just because you filled out your scantron.

Why is the possibility of this being all nonsense not even being mentioned? I’ll tell you why. It’s because humans are sick. They want robots to be making up secret languages, we eat this stuff up. Robots taking over the world? Oh my that would be terrible! What entertaining chaos that would be!

Why do you think people fund these weird projects in their first place? We are dying for some sort of apocalypse. We make up rumors about history to make people believe in them, then we play with fire like AI robots and then run screaming when they start talking to eachother.

I’ll tell you what really happened. Facebook made some shitty robots but they spent way to much to tell everyone that they ended up being retarded. Why is St. Patrick a genius? He invented a fake problem and then solved it to make himself a hero.

This is what the robot looks like by the way, personally I would have killed it on site-

Instead of being the company that couldn’t make working robots. Now they are the company that made evil robots and shut them down just in time! Suddenly the failed project is forgotten and Facebook is back in the headlines. Very impressive Facebook… PR is just turning lemons to lemonade and you continue to be on of the best at it.