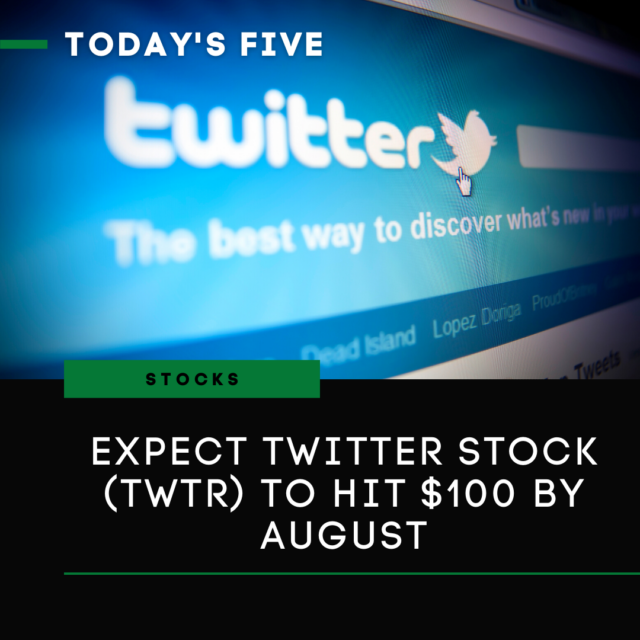 Twitter stock is hitting $80 in the next two months. And then $100 two months after that.

It’s happening. Elon Musk is buying Twitter. It’s not a question of if, it’s when. So the only question for you is if you want to double your money or not.

Nothing Is Slowing Down The Twitter Stock Rocket Now

When you look at Twitter stock right now, it has just closed today at $4.50. A 5 day high. There are 4 fundamental reasons why Twitter stock is going to keep going up.

1. Shareholders Are Trying To Box Out Elon

The Twitter board has even dubbed it the “poison pill”.

What is the “poison pill”? Aside from a pathetic attempt at saving a company, Quartz describes it as such:

“The poison pill is a common nickname for a shareholder rights plan, which allows shareholders to buy additional shares of a company’s stock at a discount, diluting the value of each individual share.

A company concerned about an unwanted corporate takeover will put the plan in place and, after a triggering event—in Twitter’s case, if one person buys 15% of the stock without the board’s approval—all other shareholders will be afforded the opportunity to buy up more shares. Musk currently owns 9.2% of Twitter.” – Source

To put it in simple terms: if Elon Musk obtains more than 15% of the company, then shares will be available at a discounted price to try and make it harder for Elon to take up more stock.

“On April 18, Twitter filed an 8-K form with the US Securities and Exchange Commission detailing the plan: Shareholders will be able to pay $210 for one-thousandth of a share of Twitter preferred stock stock for each share of Twitter common stock they hold.

Each share of preferred stock would confer voting rights, and would immediately be worth double the purchase price, or $420.” – Source

This same afternoon the stock spiked to $47.

Once Elon hits 15%, expect the “poison pill” to kick in hard and fast. Elon currently owns 9.2% of the company. It doesn’t matter how long he can hold it, the point is the price will keep going up.

Ah every retail investors favorite. The meme stock. It’s unpredictable, and when you have own it you know with every dollar it increases the SEC feels as if the fabric of society is ripping. It is a sweet feeling of victory.

Similar to Amazon and GameStop, Twitter was seen as open season for a lot of short sellers and hedge fund managers as a quick put play.

Then Q4 earnings came out. Then out of nowhere Elon said he wants to BUY all of Twitter AND that he wants to fire the entire board.

A lot of people in deep puts will have to continue to buy shares with everyone else to cover their losses over the next few months. Thus increasing the price even further,

To add to the hype of it all, Apollo Global has also mentioned they are interested in purchasing Twitter.

“Private equity firm Apollo Global Management has held discussions about financing a potential takeover for Twitter, according to sources familiar with the matter.” – Source

Clearly from all directions Twitter is receiving not only a lot of attention, but a lot of high valuations.

4. The Hype Around Twitter Stock Right Now Is Just Unreal

I mean let’s be real.

Constant talk on the internet and buzz in the world about Twitter and what will happen.

Q4 earnings that were THROUGH THE ROOF.

The subtle hints of the anti-woke people rallying behind it in the name of free discussion.

This is a meme stock if we have ever seen one. It may slow down, but Twitter stock will be hitting $100 before the year is over so honestly I’d just hang on to it.

Have I steered you wrong before?