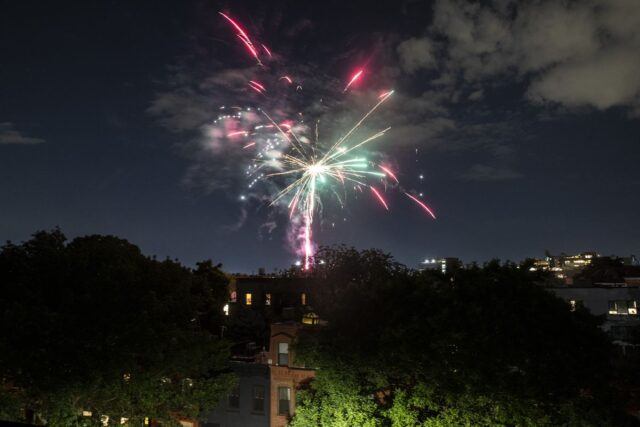 “Matthew King, 35, and Rayval Singh, 22, were returning from a fireworks shopping spree at a store in Pennsylvania when FDNY fire marshals stopped them after they crossed the Goethals Bridge about 5 p.m. Tuesday, officials said.

The marshals were “conducting surveillance to curtail the extensive illegal fireworks condition in our city,” an FDNY statement said. FDNY officials wouldn’t say which store the men were coming from. They were charged with reckless endangerment and unlawful dealing of fireworks, and were released with desk appearance tickets.

The photo above is the fireworks that were seized.

NYC has received over 3,000 complaints of mysterious fireworks going off in the past week alone. And he mayor has done NOTHING in response. So two nights ago NYC residents protested outside his home.

Hundreds are protesting outside Gracie Mansion in #Manhattan right now after @NYCMayor refuses to do anything about the insane fireworks the last few weeks plaguing NYC. Residents can't sleep, so they decided to not allow Deblasio to sleep tonight either. pic.twitter.com/Kom1X7PTPM

So DeBlasio said he was going to “crack down” on the fireworks but he just let two smugglers go without questioning? DeBlasio, are you the one setting off the fireworks?

“We’re going to start a huge sting operation to go and get these illegal fireworks at the base, meaning everywhere they’re being sold around New York City, and even where they’re being sold in surrounding states,” de Blasio said at a press briefing Tuesday, adding that officers would conduct undercover buys aimed at “finding where the supply is and cutting it off at the knees.”

Forty officers from the city’s sheriff’s office, the NYPD Intelligence Bureau and the FDNY Fire Marshal will be part of a task force tackling the illegal sales. – Politico

This is your idea of cracking down DeBlasio? Sezing the fireworks and not arresting the smugglers?

How about we bring them in so we can at least ask them where they were bringing them? If they were going to use them? The city needs answers!

Like I know saying the NYPD, or FDNY, or DeBlasio is behind the NYC fireworks would sound crazy. But if they don’t stop acting so weird about all of this then I might start thinking it too.