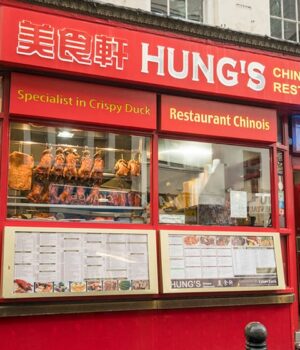 In this current climate people have been ordering delivery more than usual. Which isn’t surprising, half of the country is currently working from home and being told to shelter in place. On top of that, it has become a recurring theme during this pandemic that local restaurants are struggling and need takeout and delivery orders more than ever. Some people were concerned with the possibility of Coronavirus contraction through food delivery. But a young couple in Newark, New Jersey never thought their online delivery order would result in a positive diagnosis of oral herpes less than 4 days later.

The newly engaged Newark couple prefers to remain anonymous during this investigation. They are both 29 years old and have lived in Newark for a little less than a year.

Both claimed the food appeared fine on delivery to the best of their memory.

A few days after the meal, both developed “extremely noticeable” sores in their mouths. Horrified they both went to Urgent Care where the doctor on call diagnosed them with what was described as a “malicious form” of oral herpes.

After the doctor informed the soon to be wife that the likely cause of two unexplained oral herpes being found in two individuals in a relationship was infidelity. The 28 year old woman was extremely confused since they had been quarantining together. How could her husband have secretly been keeping an affair alive?

“After she confronted her husband the doctor’s diagnosis, he assured her that he didn’t commit any infidelity and would submit to a test to prove it. He took the test and was found clean. All this, taking the span of three days or so, the perplexed couple looked everywhere for an answer. They took a sample of the leftover Chinese food into the lab, where semen was found in it – this semen being the source of the herpes.” – Source

But for a second let’s assume this is all true.

Why in the world would a guy be jizzin on sesame chicken in a time like this? China already has a bad rep for spreading this thing help your people out and stop using the egg rolls as pocket rockets until everything dies down a bit. If I were Chinese I would be very upset at this behavior. But I’m not so I’m just kind of freaked out by it. All of it in general is unsettling.

What if they didn’t catch herpes? Is this a thing that Chinese chefs do to warm up the wok on a daily basis but I just never knew because I never caught an STD? It makes you think.

Either way apparently people getting their rocks off by secretly getting their spunk in your mouth is not a new thing. An article found from 1993 told a story that is frankly that just gross…

“There is a street in South Shields in Newcastle, UK, that is supposed to have a record amount of Indian restaurants in it. There was a story circulating recently about some lads who ordered a take away late at night, rather the worse (or better) for wear after a night on the town. They all went home that night and devoured their curries, except one guy who fell asleep. The next day he awoke and decided to have curry for breakfast, but upon opening his decided that something looked dubious about it. He got a friend who was a medical student to examine it, and discovered it contained FIVE different semen samples.”

Maybe the people who ordered on GrubHub didn’t tip well? Who knows. If the chef making your food has a fetish for this though no amount of money will be enough to hold the secret sauce on your McDouble. Chinese food herpes. No Bueno.