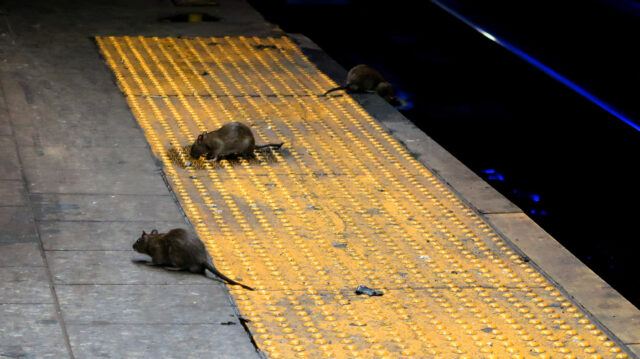 Experts say the uncharacteristic aggression in the rats and the Coronavirus pandemic are related. According to affiliates of Today’s Five, An MTA worker was attacked by a pack of around 30 rats over Memorial Day Weekend.

Ryan Fischer, 35, has been an engineer and safety inspector for the MTA for over 10 years. Fischer reports the attack happened in the subway tunnel near 42nd and Lexington while he was inspecting the R line, he is unsure which station at the time he was closest to, but knows he was out alone inspecting the train line near the entrance. The attack happened on Saturday, Fischer estimates it was around 2 am.

“It was definitely late, I was doing a quick check before heading out.” Explains Fischer, “I turned the bend and with my flashlight saw at least forty or fifty rats all crawling all over each other and eating some large carcass. Seeing that caught me off guard big time.

Like we see rats all the time, but like I was definitely caught off guard because usually its one or two max and they scatter when you put the light on them, but these guys didn’t seem to notice me so I did watch for a bit.

Then I felt things crawling up my legs, there were like three or four rats climbing up the back of my legs, they were so fast too it was unreal. Before I could start running they were scratching at my neck. I turned my flashlight and there were rats literally everywhere.

There were altleast 30 of them jumping at me and latching on but I had long pants and a jacket of course so I was swiping off most of them, by the time I got out of the tunnel all but a few had retreated, kicked the last two. Never ever have I seen rats act like this.” – Fischer

Fischer only had a few minor injuries from the experience and after an examination from the hospital was released within hours. Fischer overall seems to be un-phased by it, but he is not the first to a notice a change in the behavior of NYC rats.

“The rats are becoming aggressive toward people, and toward each other,” Bobby Corrigan, an urban rodentologist who has both a master’s degree and Ph.D. in rodent pest management, said on Sunday. “They’re simply turning on each other.” – NYT

What Does Coronavirus Have To Do With Rats?

To put it simply, with everyone quarantining from Coronavirus, the rats have no garbage to eat.

“As restaurants and other businesses have closed during the coronavirus pandemic, rats may become more aggressive as they hunt for new sources of food, the Centers for Disease Control and Prevention warned...Dr. Corrigan said there are certain colonies of rats in New York that have depended on restaurants’ nightly trash for hundreds of generations, coming out of the sewers and alleys to ravage the bags left on the streets. With the shutdown, all of that went away, leaving rats hungry and desperate.” – NYT

Why Do You Need To Worry About Rats?

Well, first of all, the CDC is literally saying to worry.

“They are hungry,” said Robert Villamil, owner of Crow Pest Control. “Rats are wild and are looking for food and trying to survive. Rodents are moving away from empty restaurants and bars where they used to find food and scurrying into residential areas.” – Source

So apparently they are migrating into residential areas. As of now this is still preliminary, there have not been any rat attacks in suburban homes. This is something the CDC and pest control agencies in each state will monitor.