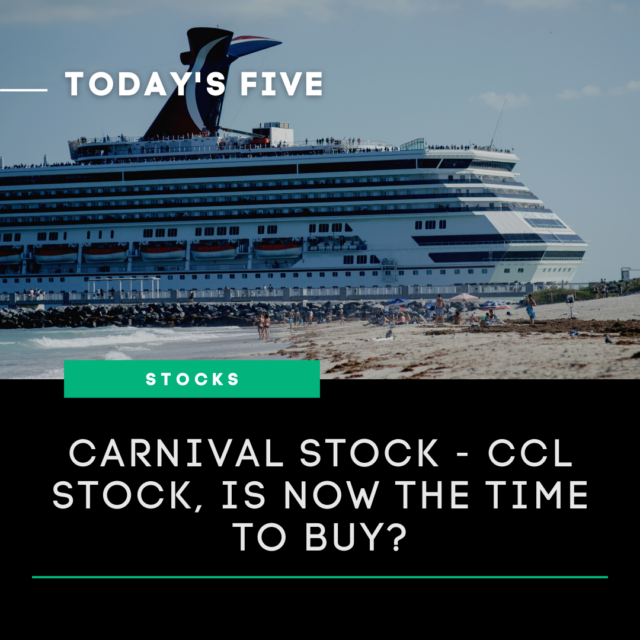 It’s difficult to think of an industry that has been more impacted by the COVID-19 pandemic than the travel industry. With global travel brought to a stand still for the better part of two years, these companies scrambled to keep themselves afloat. It seems a bit early to discuss the rebound of Carnival stock (CCL Stock).

The airline industry famously received billions of dollars in bailouts from the US government at the start of the pandemic, while other industries like hospitality and cruise lines were forced to drastically reduce their workforces.

For Carnival Corp (NYSE:CCL) shareholders, it has been a period to forget. Shares of the stock are down by 48% year to date in 2022, 63% over the past 52-weeks, and a staggering 83% over the past five years.

Carnival made use of a slow 2021 to work on optimizing its fleet of ships and eliminated 19 of its least profitable vessels. While this might seem like trimming the fat, it is a positive catalyst for when cruise ship travel does pick back up again. Eliminating low efficiency vessels will likely allow Carnival to improve on its margins and create better cash flow back into the company.

Although domestic travel in the US has mostly opened back up, as a global company, Carnival faces continued travel restrictions from international markets. These vary from region to region, but some roadblocks include proof of vaccinations, negative tests, and even quarantining.

Of course, when a cruise ship docks in a new port for only a day or two, aquatinting is clearly not an option. In addition to this, any positive test amongst the thousands or even tens of thousands of passengers on the ship would potentially derail the ability for the ship to dock at a foreign country.

On top of this, ongoing geopolitical issues in Europe, including the Russia-Ukraine war, has significantly impacted Carnival’s ability to operate. In its recent quarterly earnings call, Carnival admitted that the ongoing situation in Ukraine has caused a material impact to the business in Europe.

Other regions like Asia have been stricter and slower to reopen its borders to travel. One of Carnival’s main routes in Asia starts in Singapore, which only recently reopened its borders, while other countries like Japan remain closed to individual tourists.

With all of that being said, if you believe the worst of the pandemic is behind us, then you also likely believe that we are closer than ever to global travel reopening. Carnival’s stock is trading at its 52-week low prices, and levels that are even lower than during the peak of the COVID-19 pandemic.

There is no doubting that like many stocks in this market environment, Carnival finds itself in oversold territory. Value investors will likely see that the worst is seemingly behind Carnival, and that the stock has found a near-term bottom that can provide reasonable returns over the next five years or so.

Still, until there is more clarity on global tourism in international markets, and a potential conclusion to the situation in Ukraine, Carnival will likely continue to see short-term volatility.