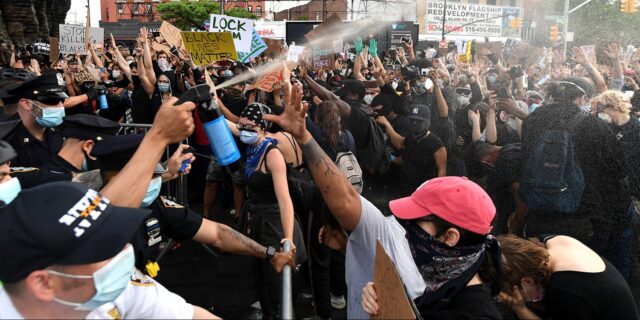 Although the Black Trans Lives matter protest was going well all morning and early afternoon, this peace did not last forever. By 4pm ET there were allegedly flags being burned in the street. By 6pm protesters were also allegedly getting into physical altercations with police and large amounts of tear gas was deployed.

“Thousands of supporters dressed in white congregated outside the Brooklyn Museum Sunday to call attention to the plight of Black trans lives, including the death of trans woman Layleen Polanco.

The event, Brooklyn Liberation: An Action for Black Trans Lives, was organized in part by The Okra Project, Marsha P. Johnson Institute, For the Gworls, G.L.I.T.S., and Black Trans Femmes in the Arts.

The thousands of New Yorkers attending Sunday’s rally filled several blocks surrounding the front of the museum. A march was scheduled to follow the afternoon rally.” – NBC New York

Around 1pm this is what it looked like right outside the Brooklyn Musem:

From a fire escape across the street pic.twitter.com/pTZ1ndnKZl

This was already enough to get the attention of New York Governor Andrew Cuomo. A governor that has been pushing the importance of social distancing harder than most politicians are.

He went live on a press conference at around 1pm when the gatherings started to happen in Brooklyn. He threatened New Yorkers that if they do not start adhering to the guidelines he will be enforcing a a longer stay-at-home order and shut-down for Manhattan and The Hamptons specifically.

“Manhattan and the Hamptons are the leading areas in the state with violations,” Cuomo said.

“These are not hard-to-spot violations. People send videos of these violations,” the governor said — two days after at least 200 people were caught on video partying together, many without masks, around St. Marks Place in the East Village in Manhattan.

“They are rampant, and there’s not enough enforcement,” he said of violators.

“I’m not going to allow situations to exist, that we know have a high likelihood of causing an increase in the virus,” Cuomo said. “Local governments, do your job.” – NY Post

Well, Cuomos words didn’t work, here is what the scene looked like at 5:45pm ET:

The hype around the black trans lives matter and the rally spread like wildfire through Twitter. The NYPD speculates that the stark increase in attendance was centered around the circulation of the hashtag #BlackTransLivesMatter. Some officers believed many of the protestors would not even be aware of the rally if it wasn’t for Twitter.

But in reality, this may have just been the perfect storm. Or the perfectly planned storm?

Today is Donald Trump’s birthday. We don’t know if this protest was purposely planned to coincide with that. Although it’s obviously not outside the realm of possibility.

Especially considering the report we heard from a source that small groups of people were running around the protest area and lighting small American flags on fire. This source is unconfirmed but according to Ryan Frost he photographed the flags, believes they “were sent by ANTIFA” and he watched NYPD officers arrest them after they “tried to fist fight the officers”.

Knew this would eventually turn bad, protestors are now setting small American flags on fire in the middle of the street. Right outside the Brooklyn Museum.

Considering it is also Flag Day, it is possible there was attempted symbolism here perhaps.

Hopefully this story is entirely false or exaggerated, but either way, if things are going south. It will go south quick. We may not know about official flag burning reports but we do know some things.

What we do know, is that many liberals on Twitter today decided to dub June 14th, ‘Obama Day’. But a lot of people didn’t know this was a troll attempt, and instead believed that June 14th was in fact National Obama Day.

Forget all that noise. We know you’re having mini strokes. What’s more important is that today is #OBAMADAYJUNE14 pic.twitter.com/AmW5qAnsMf

Before long the top 5 trending hashtags on twitter were as follows:

Oh right, forgot to mention, on top of everything else it’s also flag day. Could be why on sight flight flag burning was a tactic today in the protest. Today was certainly quite the roller coaster.

Most of the time this kind of stuff is all harmless banter and trolling, liberals attempting to get Obama Day trending on Trump’s birthday sounds about right. I don’t believe anyone wanted to incite violence here.

Friend in NYC says #BlackTransLiveMatter protest at Brooklyn Museum has gone absolutely off the handle.

Protestors charging into riot shields, tear gas everywhere, he said no gun shots I am going to ask for video/pics will report back soon

But today wasn’t a normal day. There was a protest, and tensions are high right now. It is fair to say that more people showed up to the Brooklyn Museum after the ‘ObamaDay’ troll move went into effect. More liberal locals in Brooklyn probably felt inclined to attend if it was the Black Trans Live Matter protest AND National Obama Day.

As for the violence, I know the high majority of us can agree that is not needed. And with the volume of people so high right now, hopefully things settle down soon. A third curveball here could lead to an awful night for NYC.