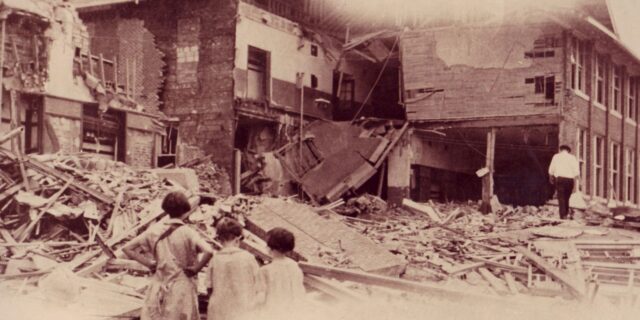 The Bath School Disaster. America’s forgotten school massacre. Not many are aware that the bombing of Bath Consolidated School in 1927 remains the deadliest school massacre to ever take place in United States History. Currently, America is a society that experiences school shootings on a seemingly regular basis. Many chalk this up as a modern issue; yet so few have heard the story of the Bath School Disaster. A story that alone will make one wonder, are the tragedies of Sandy Hook or Columbine a product of our culture, or has the compulsion to massacre young school children been inside certain individuals longer than we could have imagined?

Before digging into motive or background, it’d be better to first layout the events of the massacre.

What Was The Bath School Disaster? – A Timeline Of Events

Andrew Kehoe (perpetrator of bombing) has already placed bombs at the school. Firebombs detonate at the Kehoe Farm first. Multiple firearms detonate inside houses and farm buildings on the property. Explosion damage is extensive and shrapnel shoots out and damages nearby windows of neighbors. Neighbors take notice of the fire and volunteers rush in.

Unlit dynamite is found on the scene, Andrew Kehoe flees the scene in his pickup. Before leaving his burning farm he stops to tell a few volunteers they should head to the school instead.

The explosions at Bath Consolidated School began at 8:45 AM.

Rescuers on the way to the Kehoe farm heard the explosions behind them at the school and many decided to turn around. Many parents in the community followed suit.

About a half hour after the detonation of the north wing, Andrew Kehoe drove up to the school in a truck rigged with explosives.

Kehoe had some kind of shotgun with him when he exited the truck. The superintendent of the school stopped him and a scuffle ensued as both men wrestled for the gun. Eventually Kehoe detonated the explosives in his truck during the altercation. In the explosion both Andrew Kehoe and the superintendent were killed instantly. An older farmer as well as an 8-year-old boy were also near the scene and were both killed from the explosion.

Spoiler: Andrew Kehoe did it. He was a farmer.

So Why Did Andrew Kehoe Do It?

The most popular explanation is that Andrew Kehoe was simply a psychopath.

I think there is little doubt about that. Sure, the man had a rough string of events happen. But blowing up the local elementary school is not how a normal person deals with tough financial times. So I will explain his motives, but make no mistake my ruling is the man was just crazy.

Andrew Kehoe was a very conservative man. Fiscally conservative. He was very upset that the taxes on his property were over $50 higher after his property value was reevaluated. He demanded that his property be re-appraised but this appeal was declined by the bank. It is on record that he told one banker at some point that “if he couldn’t live in his house, nobody would”.

In 1925 he was appointed as the temporary Town Clerk (surprising considering his woe is me attitude). However he lost in 1926 when he tried to run and actually win the position but was defeated. This apparently made him very upset and mad at the town but once again only a psychopath would want to blow the town up because of it.

The final straw came when tax votes came around and there was an agreement to raise taxes to get further funds for local schools. Apparently that same fiscal year, because of the passing of that vote, Kehoe was unable to pay his mortgage. So he killed his wife, burned his house down, blew up a school, killed over 40 people including over 30 innocent children, blew up his truck and killed himself.

The Short Memory Of America

There I did my due diligence in explaining his side.

Chances are you still don’t feel compassion for Andrew Kehoe.

The weirdest part about all of this is why it is so forgotten. It is the most deadly massacre to ever occur at a school in the United States. And I heard about it like, three days ago. It is extremely well documented, there are even people still alive who who remember it. So why does no one talk about the Bath School Disaster?

Guess it’s just old news, man. I still think it’s worth noting that apparently randomly attacking school children because you hate your own life isn’t something new. Not sure yet if I’m comforted by that or not. Leaning towards not.