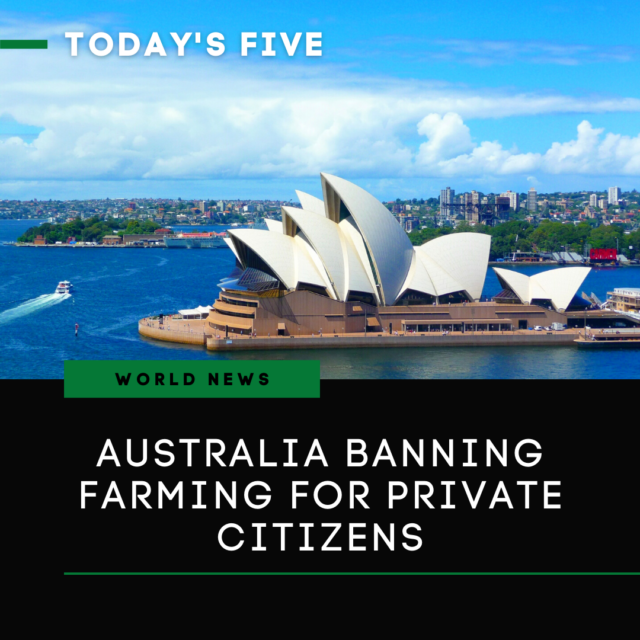 On an episode of The Joe Rogan Experience, Joe Rogan brought the issue to light. The issue that Australia banning farming for private citizens is a real thing.

First of all – Joe Rogan is definitely taking a lean here. That is for sure. But he is not wrong.

There are people in Victoria who are not happy about this new bill.

Now, according to the sources that Joe Rogan did eventually mention Australia banning farming (especially in New South Wales) could be coming in the near future.

“VICTORIA, AUSTRALIA prohibits people from growing their own food.

VICTORIA, AUSTRALIA: Premier Dan Andrews is passing a bill that prohibits people from growing their own food.

The Agriculture Legislation Amendment Bill 2022 has had its second reading in parliament. Biosecurity is stated as the reason for changes.” – Source

The Guardian was quick to jump in defense of the bill. Pointing out how Joe Rogan is uninformed on the legislation at hand.

“The podcast host Joe Rogan has been widely mocked for wrongly claiming a proposed Australian law tried to stop citizens from growing food, then realising, live on air, that it “might be fake”. – Guardian

Snopes said it was fake.

This claim is just the latest wrinkle in an oft-debunked conspiracy theory. ” – Snopes

So Is It True?

Actually… Yes. Snopes basically says so themselves. If the government is allowed to enter your property and dig up your farm for ANY reason, then really what is the difference?

“VICTORIA, AUSTRALIA: Premier Dan Andrews is passing a bill that prohibits people from growing their own food,” reads a tweet from May 5, 2022 by an account called Apex World News.

“The Agriculture Legislation Amendment Bill 2022 has had its second reading in parliament. Biosecurity is stated as the reason for the changes.”

The tweet was shared more than 3,000 times before it was deleted.” – FactCheck

So why would this story be pulled back after it was initially shared?

Unless initial feedback told them they needed to spin that a little better. Or they paid the right people just a little too late.

As Far As Australia Banning Farming For The Average Citizen

AOs have the power to conduct patrols, inspections and intelligence operations; they also educate the community about Victoria’s primary industries.

We expect our AOs to exercise their powers with a high degree of professionalism and impartiality and do not tolerate improper conduct.

Who is an Authorised Officer (AO)?

An Authorised Officer is a person authorised under legislation administered by Agriculture Victoria (within DJPR) to carry out a compliance or enforcement function.” – Victoria Government

So Why Is Australia Banning Farming For Private Citizens?

Well according to Australia, it is for the safety of the people.

To many Australians, and this is understandable, they don’t like the idea. It feels like a slippery slope.

It sounds all nice and dandy. The “AO’s” will just get rid of the “bad” crops”. What if that turns into all the crops.

Is that paranoid? Of course it is.

I’m just saying you don’t live the life that these farmers live. Don’t think you can put yourself in their Uggs when you just don’t understand that world.

Is A Career In Radio Still Possible? With Social Media, It Can Thrive