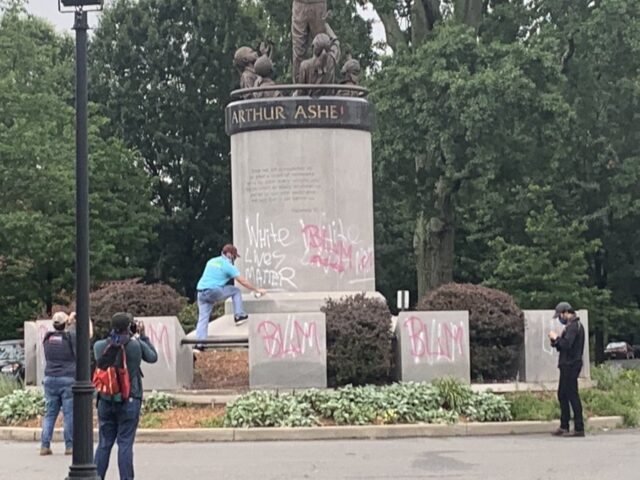 “A statue of African American tennis legend Arthur Ashe on Richmond, Virginia’s Monument Avenue has been vandalized with the words “White Lives Matter.”

Photos show the base of the monument tagged with white spray paint and the words “white lives matter” as well as the initials “WLM.” Those initials were then later painted over with “BLM.”

Richmond Police said they were alerted to the vandalism about 10:15 a.m. Wednesday. Police say red paint on the statue itself was already being cleaned off by community members.” – Fox News

A community member told police that they had removed a “blow up sex doll” that was hanging from the monument.

Police who were interviewed on the scene said there were images of swastikas, male genitalia, as well as expletives related to people of color. Used condoms and crack pipes were also found on the scene.

This guy who said his name is “everyone” and a graduate of Benedictine High School just spray painted the Arthur Ashe monument with “white lives matter.” #richmondprotests pic.twitter.com/SBMyIvg6qs

USA Today reported on the vandalism as well – “A statue of tennis legend Arthur Ashe was spray painted with the words “White Lives Matter” and “WLM” on Wednesday in Richmond, Virginia.

Ashe is the only Black man to win Wimbledon, the U.S. Open and the Australian Open. Throughout his career and afterward, Ashe fought for racial equality and civil rights, notably the movement to end apartheid in South Africa. He died in 1993.” – Source