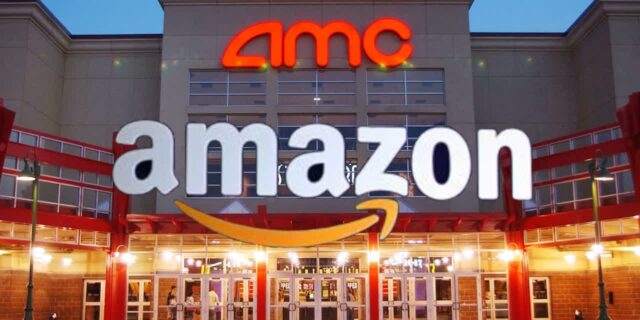 According to sources close to Odeon Cinemas, there are expectations for Amazon to buy AMC outright in the coming months. Dates remain unclear but there is one thing for certain. If a deal is reached there will be no merger. Amazon will purchase AMC in its entirety, or there will be no agreement at all.

We already know that Amazon was in discussion to buy AMC back before the pandemic.

It’s unsurprising that Amazon waited out the lockdowns to see if they could purchase the company at a lower price than it was already.

We also know preliminary talks started again in June. Now we have sources that tell us negotiations have reopened again.

It was always in the air that Amazon expected to buy AMC in 2020. Now with the competition of the online streaming world, Amazon has kicked talks up into high gear.

Expectations For Amazon To Buy AMC – What Should We Expect?

What would an Amazon takeover of AMC look like?

First, and most importantly. We can expect a giant increase in stock value across both companies. Due to Amazon’s success with other acquisitions such as Wholefoods, there will be little doubt in Amazon finding success with AMC quickly.

As we always say at Today’s Five, buy the news, sell the hype-

“Whatever the report’s veracity, the impact the speculation had on AMC’s stock was very much real, and a fascinating development for the world’s largest movie theater chain given its recent fortunes.” – Source

With the competition of streaming services heating up every company in the race is looking for an edge. – Source

“With so many venues added to its portfolio, Amazon could conceivably kick off a new mission to recruit Hollywood’s top directors, writers, and actors.

The pitch: We are no longer a streaming-first company with an occasional indie hit that plays in theaters for two weeks for Oscar consideration; join us and we’ll play your work each night across the largest network in the world.” – Source

Even with streaming on the back-burner, building relationships with top Hollywood directors and actors will lead to a huge increase in quality, interest, and organic promotion of Amazon Originals.

A Huge Drop In Ticket Prices

If Amazon is expected to buy AMC then we should expect an Amazon business model.

Lower prices, bleed out the competition.

In addition to improvements to the viewers entire experience Amazon will undoubtedly come up with ingenious ways to completely alter and re-inspire the cinema going experience for the average consumer.

On top of that, we can expect Amazon to slash ticket prices in the meantime to garner interest and showcase their new product to as many eyes as possible.

Prime subscribers pay $119 per year to unlock a range of perks including free delivery for Amazon retail shopping and video streaming.

Amazon is trying to cut the time it takes to get packages to customers as it fights off competition as traditional retailers like Walmart move into e-commerce.

If Amazon acquired AMC Entertainment, it could use its theater locations as pickup points for its commerce customers.

For AMC Entertainment, being bought by Amazon could help end its financial struggles.” – Source

“The next big deal could be coming soon to a movie screen near you.

Bloomberg is reporting that the leading online retailer (Amazon) is one of the bidders for Landmark Theatres, the Mark Cuban-bankrolled multiplex chain with 53 theaters covering roughly 255 screens in 27 different markets that was put up for sale four months ago.” – Source

Kanye Claims Media Will Kill Him Like They Killed Michael Jackson