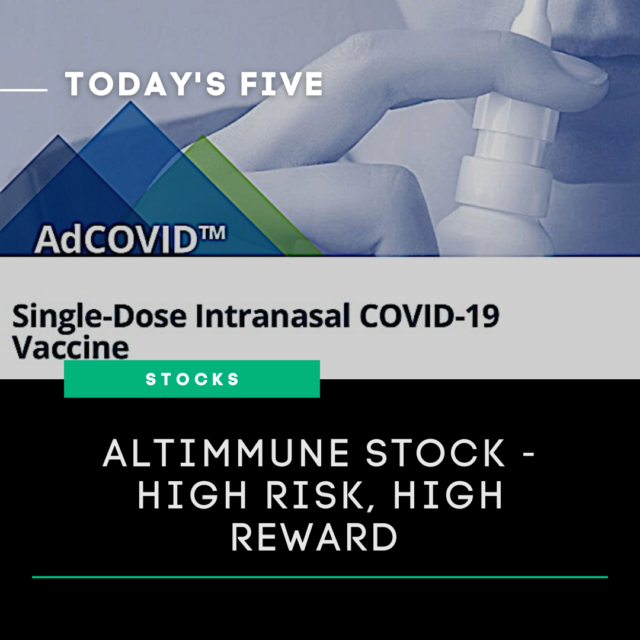 What is Altimmune Inc?

There are few investable industries that are as boom or bust as the clinical-stage biotech sector. Why is this? While some companies can make it big and become a Moderna (NASDAQ:MRNA) or Pfizer (NYSE:PFE), a majority of biotech companies fail to ever create a product pipeline strong enough to make them competitive. Ocugen could be next on this list. But what about Altimmune stock?

Many of these firms will fizzle out and fail both as companies and as investments. Unless they manage to gain that elusive FDA approval for a drug or treatment, biotech companies can spend years researching and testing and still see no results, and more importantly, no return on your investment.

So why do investors buy into these risky biotech companies? The potential gains are extraordinary in this sector. It’s not unusual to see a stock rise by 20, 50, or even 100% in a single session if FDA approval is granted or if a clinical study is deemed successful. Even more, if it is a ground-breaking treatment, a company can ride this for decades as US drug patents typically last for 20 years.

Altimmune Inc (NASDAQ:ALT) is a Maryland-based clinical stage biotech firm that focuses on the fields of obesity and liver diseases. The company was established back in 1997 and debuted on the NASDAQ exchange in July of 2020.

Altimmune’s management team is full of capable and experienced industry leaders, led by Dr. Vipin Garg who has been the CEO of the firm since 2018.

What Happened To Altimmune Stock?

The biotech industry overall has been one of the hardest hit during the recent market correction. As can be expected in a market environment that has punished unprofitable companies, most biotech stocks have been slashed considerably.

A quick look shows that the SPDR S&P Biotech ETF (XBI) is down by 42% so far in 2022 and 51% over the past 52-weeks. XBI is typically used as a measuring stick for the overall biotech sector performance.

It has been a market environment that has not been kind to high growth sectors like biotech. With a looming recession and a hawkish Fed aggressively raising interest rates to battle inflation, these stocks will continue to see muted growth for the near-term.

Altimmune stock has held up reasonably compared to the broader biotech sector and has even outperformed the NASDAQ and S&P 500 on the year.

As mentioned, Altimmune focuses primarily on treatments that fight obesity and diseases of the liver. In the US, obesity has become one of the leading causes of death and illness amongst adults, and is fast becoming a cultural phenomenon that is almost exclusively an American problem.

The numbers are staggering: the CDC reported a 42% obesity prevalence in the US with a nearly 10% rate of severe obesity. Perhaps even more startling is that there is a 15% obesity rate amongst children and teenagers, a more than 300% rise from the 1980s.

According to Altimmune, obesity rates will rise to more than 50% amongst Americans by 2030, with severe obesity jumping to more than 25% in that same time period.

Obesity has been closely linked to race and socioeconomic status in the US. Fears of rising food prices could lead to another surge in obesity and obesity-related diseases over the next few years. Obesity is a costly disease as well.

The CDC estimates that it costs over $147 billion annually for total obesity medical care amongst Americans. Indeed as fast as obesity rates are rising, so too is the market for medical weight loss treatments. It is estimated that this global market will be worth more than $27 billion by 2028.

Altimmune has quite the total addressable market ahead of it, but the company still needs to execute on its product pipeline.

For obesity, Altimmune is developing a treatment called Pemvidutide, a peptide-based GLP-1/glucagon receptor which directly targets weight loss and reduction in liver fat levels as treatments for NASH or Nonalcoholic Steateohepatitis which is the most severe form of NAFLD (Nonalcoholic Fatty Liver Disease).

Pevidutide entered a 48-week Phase 2 MOMENTUM obesity trial that started in the first quarter of 2021. Altimmune is hoping to have 24-week interim data ready and analyzed by the fourth quarter of 2022.

In addition to this, Pevidutide is also involved in a 12-week phase 1B NAFLD Trial Readout for the third quarter of 2022, as well as a 24-week Phase 1B trial readout for the fourth quarter of this year as well.

Altimmune has another product in the pipeline called HepTcell which is an immunotherapeutic treatment candidate for patients with chronic Hepatitis B infections.

HepTcell is currently involved in a Phase 2 trial with an expected readout in the first half of 2023. This treatment uses a novel technology that is designed to drive CB4+ and CB8+ T-cell responses.

The key with HepTcell is that it accounts for genotypes of all genetic backgrounds and in the words of Altimmune, ‘wake up’ dormant T-Cells to fight the virus itself.

In this way, Altimmune is aiming to provide a full fledged cure for HBV and to eliminate the infection itself. Current market antivirals focus more on preventing the spread of infection but do not provide a solution for those who suffer from chronic infections.

Both of these potential drug candidates have existing US patents that expire in 2035 and 2033 respectively, which means the company does have some time to fully develop these treatments.

With the results of these studies expected to be fully known by the first half of 2023, the next year could be a critical turning point for Altimmune to move from a clinical study biotech company to a pharmaceutical powerhouse.

Analysts are Bullish on Altimmune

While analyst price targets and stock ratings shouldn’t be taken as gospel, they do provide investors with an indication on where the company is headed.

If you are skeptical about analyst upgrades and downgrades, take the overall sentiment of the stock rather than using the actual price target as a gauge. Price targets can rise and fall depending on the strength of the market.

For example, this year we have seen plenty of price targets fall lower but the analysts still maintain a Buy rating for the stock in question. In either of these situations, Altimmune stock has the support of Wall Street analysts nearly across the board.

According to TipRanks, Altimmune stock has a 10 out of 10 in market sentiment with a strong Outperform rating. Seven out of seven analysts that cover the stock have it as a Buy rating, with a median 12-month price target of $22.50, which represents a more than 160% upside from its current price levels.

Piper Sandler, HC Wainwright, and B. Riley are just three of the firms who have dropped their price targets recently, but still have ALT stock as a Buy rating.

Finally, another way to gauge the confidence in a stock is to look at institutional ownership. During the second quarter of 2022 funds like the Royal Bank of Canada, Morgan Stanley, Deutsche Bank AG, Blackrock Inc., and AllianceBernstein L.P all increased their stake in Altimmune.

Currently, 88% of the outstanding shares for Altimmune are owned by institutional investors. This is a strong indication that the stock is expected to perform well in the coming years.

Is Altimmune A Good Investment?

As with any biotech stock, Altimmune stock will require a strong stomach and higher risk tolerance. Shares are down considerably from the IPO price, so early investors have yet to be rewarded for taking a stake in the company.

Altimmune has two products that it has invested its near-term future in, and if either or both of these fail then the stock could go much lower. Early indications are that both treatments have been successful in clinical studies, but of course, that doesn’t always mean an FDA approval is guaranteed.

In terms of the stock, Wall Street sentiment couldn’t be higher on it. An estimated 88% of the shares are owned by some of the largest institutions in the world.

On top of that, Wall Street analysts are all in with a price target that anticipates a potential 160% move to the upside over the next 12 months.

The biotech sector itself is well oversold, although the near-term macroeconomic and market environment will not lend to growth sectors returning to prominence anytime soon. Still, at these depressed prices, Altimmune looks to be a potentially promising investment albeit with a high element of risk involved.