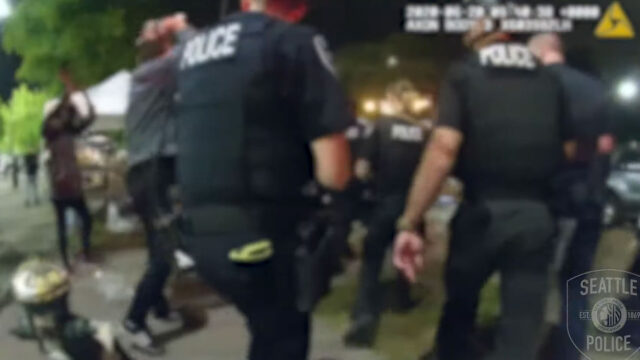 Mays Jr was killed in the early hours of Monday morning after eyewitnesses say the area’s armed security fired at the Jeep his was driving. A 14-year-old boy was also critically wounded in the shooting.

Seattle police on Wednesday reclaimed their precinct in the city’s ‘occupied’ protest zone after the mayor finally issued an early morning executive order to vacate the area.” – DailyMail

Why The Sudden Violence In Seattle?

On paper it sounded great sure, but we all knew eventually it would be shut down. So it’s a cop free zone for protesters. (To the best of my knowledge). Then overnight an executive order from the Mayor comes out to shut it all down. Yeah, kind of asking for a WACO situation.

That’s why there have been other people shot included the death of Lorenzo Anderson on June 20th and another 14-year-old that was injured in the shooting that happened Monday morning.

Cops have released what they believe to be more than enough evidence to support their use of force in the recent nights:

At least 23 people were arrested at the Capitol Hill Organized Protest (CHOP) zone Wednesday which has seen two deadly shootings and crime rise by more than 500 per cent in just over three weeks.

A second teen, Lorenzo Anderson, 19, was shot dead on the protest area on June 20.

His father, Horace Lorenzo Anderson, said: ‘This doesn’t look like a protest to me no more. That just looks like they just took over and said we can take over whenever we want to.” – DailyMail